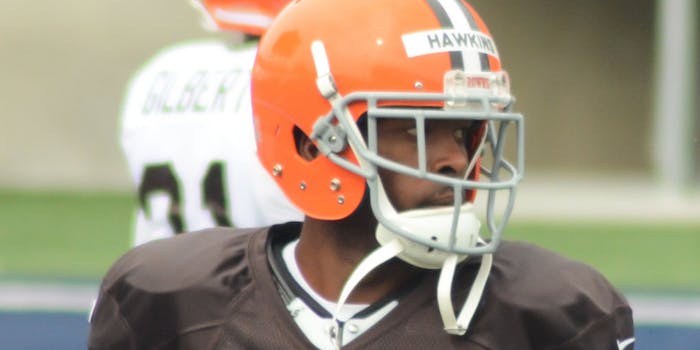 They're demanding an apology from the Cleveland Browns.

Cleveland cops want an apology from Cleveland Browns wide receiver Andrew Hawkins after he came onto the field in a shirt that demanded justice for Tamir Rice and John Crawford during Sunday’s game.

Joining five members of the St. Louis Rams, numerous players in the NBA, and the cast of Selma, Hawkins chose to peacefully protest on the field while the national spotlight was on him. While the Rams players displayed the “hands up, don’t shoot” gesture synonymous with Ferguson and others wore protest T-shirts that stated “I can’t breathe,” the last words of Eric Garner, an unarmed black man killed by an NYPD officer, Hawkins wore a shirt that stated “Justice for Tamir Rice and John Crawford.” Both of them were killed earlier this year by police.

It’s a sign of protest that didn’t sit well with the Cleveland Police Department, and Jeff Follmer, the Police Patrolman Union president, is calling for the Browns to apologize in a statement where he described Hawkins’ protest—as well as that with Browns cornerback Johnson Bademosi—as “pathetic.”

It’s pretty pathetic when athletes think they know the law. They should stick to what they know best on the field. The Cleveland Police protect and serve the Browns stadium and the Browns organization owes us an apology.

It’s a similar stance that the St. Louis Police Officers Association took when it criticized the Rams players for displaying protest on the field earlier this month, which ended with the Rams and police at odds over whether an apology was offered.

However, like the Rams, the Browns respect its players’ right to protest and announced its support in a statement.

We have great respect for the Cleveland Police Department and the work that they do to protect and serve our city. We also respect our players’ rights to project their support and bring awareness to issues that are important to them if done so in a responsible manner.