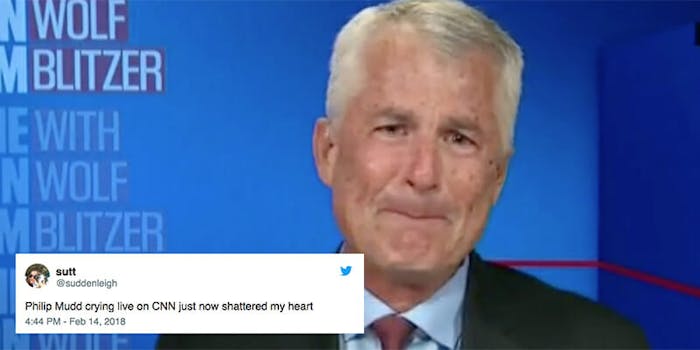 CNN analyst breaks down in tears while talking about Parkland shooting

A former FBI and CIA official broke down in sobs on CNN Wednesday while discussing the fatal high school shooting in Parkland, Florida.

The official, Philip Mudd, became tearful as he spoke to anchor Wolf Blitzer about the shooting at Marjory Stoneman Douglas High School that killed 17 people.

“Cannot we acknowledge in this country,” Mudd said as his voice cracked, “that we… we cannot accept this.”

He fought back tears but then bowed and shook his head.

The camera cut away moments later.

Viewers responded with comments about the power of the moment, many saying they felt the same way Mudd did after news came of the 18th school shooting this year.

Mudd worked for the CIA starting in 1985, then at the White House in the early 2000s and as an FBI official from 2005 to 2010, according to his website. He returned to the air on CNN later Wednesday to give commentary about the suspected shooter.