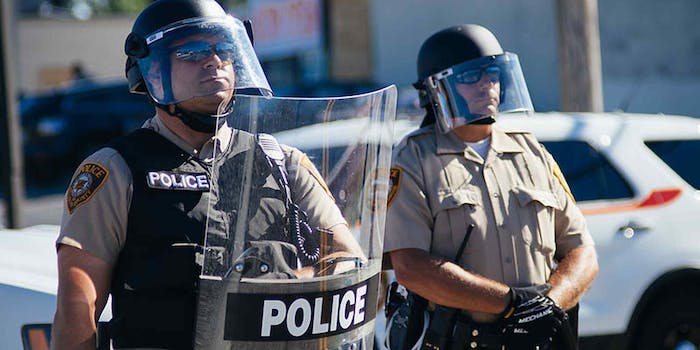 "There are many parts of the United States where apartheid is flourishing."

The reputation of Missouri police just took another major hit.

On Friday, Amnesty International issued a scathing report on the unfolding events in Ferguson, Mo., charging that the behavior of law enforcement authorities both before and after the shooting death of unarmed African-American teenager Michael Brown constituted a litany of human rights abuses.

Brown’s death at the hands of a local police officer set off a firestorm of protests in the St. Louis suburb, drawing worldwide attention after the law enforcement tactics used to manage the protest revealed the extent to which civilian police forces across the United States have become heavily militarized.

A few days after the protests began, Amnesty International sent a delegation to the city for two weeks to monitor the ongoing events and use de-escalation methods to diffuse potential conflicts. The report is the culmination of the specific events and overall trends that delegation witnessed first-hand during their time in Ferguson.

The first abuse detailed in the report is Brown’s shooting by Ferguson police officer Darren Wilson.

“Due to conflicting reports, what happened between Brown and Wilson remains uncertain,” reads the report. “Regardless, international standards provide that law enforcement officers should only use force as a last resort and that the amount of force must be proportionate to the threat encountered and designed to minimize damage and injury. Officers may only use firearms when strictly necessary to protect themselves or others against the imminent threat of death or serious injury.”

The authors charge that, because Brown was unarmed at the time of his altercation with Wilson, questions Wilson’s use of his gun to protect either or himself or others from Brown. The problem, they suggest, may reside in the overly broad way in which the state of Missouri defines when it is acceptable for someone to use deadly force.

Citing a handful of other high-profile incidents from around the country during which police killed unarmed African-American men in just the few weeks on either side of Brown’s death, the report noted that what happened to Brown is part of a “persistent and widespread pattern of racially discriminatory treatment by law enforcement officers across the United States, including unjustified stops and searches, ill treatment and excessive, and sometimes lethal, use of force.”

When it came to Missouri law enforcement’s handling of Ferguson protesters, the report was just as scathing, quoting United Nations High Commissioner for Human Rights Navi Pillay, who said, “I condemn the excessive use of force by the police [in Ferguson] and call for the right of protest to be respected. These scenes are familiar to me and privately I was thinking that there are many parts of the United States where apartheid is flourishing.”

The right to free and peaceful assembly in political protest is guaranteed by the U.S. Constitution. Amnesty International asserts that the methods used by St. Louis Country Police Department and the Missouri Highway Patrol violated that right by imposing curfews, only allowing protests to occur in certain pre-designated areas, and arresting any protestor in a demonstration who was constantly walking forward.

In addition, the report says, law enforcement’s use of paramilitary gear and tactics, like flash grenades, body armor, military-grade weapons, as well as the detainment and near-constantly harassment of journalists, functioned primarily as a way to intimidate protestors into submission. Members of the delegation were present when a police officer threatened to kill a group of journalists, an incident which was caught on video and quickly went viral.

These tactics caused the Amnesty International delegation to fear for their own physical safety—often due to police pointing semi-automatic rifles right in their faces. Other incidents that the delegation didn’t personally witness also helped contribute to a pervasive fear of bodily harm by police:

“On Aug. 13, Renita Lamkin, an African Methodist Episcopal church pastor, was shot by a rubber bullet while attempting to mediate between police and protestors. Lamkin was among protestors calling for the release of Antonio French, a St. Louis alderman who was previously arrested later released. According to media reports, Lamkin was protesting calmly while repeating ‘Jesus, Jesus, Jesus.’ When police arrived in armored vehicles, Lamkin stood in front of the protestors, attempting to mediate, telling the police, ‘They’re moving,they’re leaving.’ Lamkin heard a ‘pop’ and was hit by a rubber bullet in the stomach. The bullet left a large,bloody bruise approximately four to five inches in diameter.”

The report noted that international law does permit governments to place restrictions on the ability of people to assemble for safety or health reasons, but suggested that officials’ actions in Ferguson far exceeded that threshold when hundreds of protestors were arrested for crimes like “refusal to disperse.”

Mostly disturbingly, the report noted that there seemed to be no accountability for police officers who abused their power:

“Several times when Amnesty International delegates witnessed actions taken by police officers they requested the name of the officer or attempted to determine which law enforcement agency the officer belonged to when affecting an arrest or issuing an order to protesters. However those requests and questions often went unanswered by law enforcement personnel. Under international law, officers need to be accountable to the public and, in order to facilitate accountability, officers should be identifiable during public order operations.”

The report went on to detail an extensive list of recommendations for future action on the part of the Ferguson Police Department, the Missouri State Highway Patrol, the U.S. Department of Justice, and the U.S. Congress.