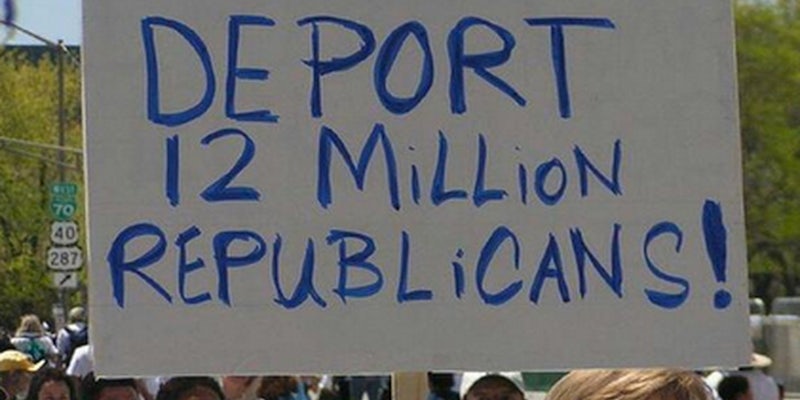 Last week, Americans from several states petitioned the White House to let them secede from the union. Now, another group is petitioning to have those original petitioners deported.

14,000 Americans have a message for the folks from around the country who are petitioning for their states’ secession: Good riddance, and get on out of here.

In what can only be described as a case of giving someone a taste of their own medicine, Birmingham, Ala., native Joshua L. fired back at the citizens from 20 states who submitted secession pleas to the White House in the days following Nov. 6’s presidential election, creating a We the People petition of his own that asks the Obama Administration to “Deport Everyone that Signed a Petition to Withdraw Their State from the United States of America.”

Launched on Monday, the petition has already accrued more than 14,000 signatures, with signees from all around the country. The goal is to bring that tally up to 25,000 by Dec. 12, at which point the petition could potentially show up for a brief moment on the agenda of some low-ranking government official.

We use the terms “brief moment” and “low-ranking government official” because the Obama Administration is not exactly in the business of deporting Americans just because they’re unhappy. In fact, in many cases, the government is legally barred from deporting American citizens, though it happens with more frequency than said government would probably like to admit. (As a federal judge ruled in U.S. v. Valentine (1968), “The only absolute and unqualified right of a United States citizen is to residence within the territorial boundaries of the United States; a citizen cannot be either deported or denied reentry.”)

Either way, it’s safe to assume that no one’s getting pushed out of the country—willing or otherwise—because they’re pissed off about four more years of Obamacare.

That said, there are more than 14,000 Americans who think that deportation of fellow citizens is a great idea, and they’d like to get started on it immediately.