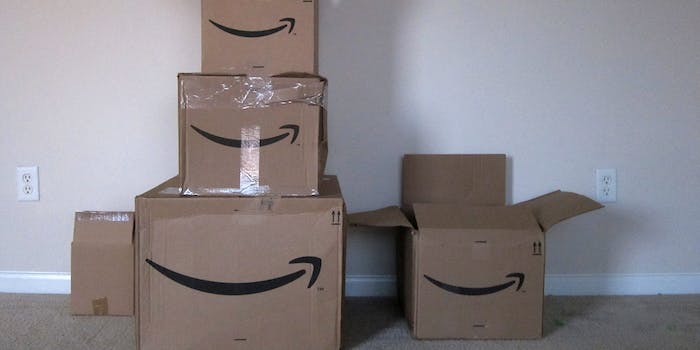 Amazon amassed its vast fortune by letting people buy products with just a few simple keystrokes. Now, the online shopping giant appears to have figured out a way to get the number of keystrokes required to place an order down to just one.

On Tuesday, the company unveiled the Dash Button, a branded piece of hardware that allows Amazon Prime customers to reorder everyday household consumables with the literal “press of a button.” Amazon offers custom Dash Buttons for more than 250 products ranging from detergent to diapers to dog food.

Prime customers can request these Wi-Fi-enabled buttons and use their hooks or adhesive backing to attach them to surfaces near where the relevant item is stored.

For instance, you can stick a Dash Button for laundry detergent on your washing machine. When you’re running low, press the button and Amazon will begin preparing your detergent order. (The order does have to be verified on a user’s smartphone, lest accidental bumps produce a bunch of unwanted deliveries.)

Dash Buttons are an offshoot of the Amazon Dash remote that Amazon unveiled last year. The company introduced the combination voice recorder/barcode scanner to get people into the habit of purchasing their groceries through Amazon. The Dash Button is part of Amazon’s strategy for competing with traditional groceries stores, TechCrunch explains:

“Amazon clearly hopes that if you have a physical one-button device near the place where you actually consume these consumables, you’re more likely to have the presence of mind to order them via its service before you run out, when a trip to the corner store might prove more convenient even than home delivery.”

In recent years, Amazon, under the direction of founder and CEO Jeff Bezos, has worked aggressively to compete with grocery stores through a multi-pronged approach. Most notably, the company has built distribution warehouses closer to major metropolitan areas, thus enabling same-day delivery in those areas. This is what allowed the company to start AmazonFresh, its grocery delivery service.

Dash Buttons may seem like a stretch at first—there was even some early speculation that the March 31 announcement represented a premature April Fools’ prank—but Amazon is no stranger to using experimental hardware to expand its business. The company recently won approval from the FAA to begin testing a fleet of automated delivery drones designed to enhance same-day delivery capabilities. Amazon Prime Air has been at the forefront of lobbying efforts for commercial drone regulations for this very reason.