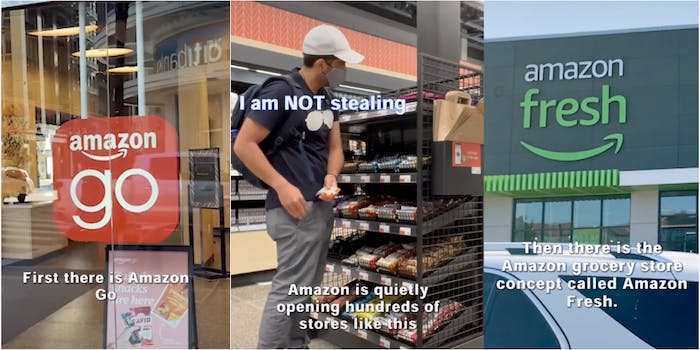 ‘I can’t wait to steal from this’: Everybody is ready to raid Amazon stores that don’t have employees

Does Amazon deserve to be robbed blind for these?

Amazon’s new stores are blowing up the internet as people are determined to steal from the employee-less shops.

A TikTok posted by the tech account Uptin is blowing up and it has the internet in a stir over the new technology.

“It feels weird right? I feel like I’m stealing,” Uptin said in the video.

The two part TikTok demonstrates how the stores work with the automatic charging. Right now, 30 AmazonGo stores are located in New York City, Chicago, San Francisco, and Seattle. Meanwhile, AmazonFresh locations are opening up all over the country.

AmazonFresh works slightly different from AmazonGo. At the Amazon grocery store, the shopping carts automatically add up whatever a customer puts into the cart and subtract anything that is taken out. Once the customer walks over the exit, the cart is charged to the existing account.

Someone tweeted out the TikTok and its getting ratioed by people who are not into Amazon’s new stores. Many are determined to steal from the employee-less stores.

“Catch me throwin shit over the gate to my homies. Free munchies,” one person tweeted.

“what if i hop that bitch … now what,” someone else added.

“If these things aren’t robbed blind I will loose all faith in humanity,” someone else posted.

“bet money they gon still find a way to arrest black folks for stealing,” someone else tweeted.

Others discussed the concern for the jobs that the stores eliminatee.

“so if we make everything automated what happens to people who need jobs bc y’all are determined to not help out the lower class,” one Twitter user said.

“This concept is fundamentally against poor and working class ppl,” another added.

In a current world where human interaction is limited due to the pandemic, Amazon is hellbent on eliminating it entirely.