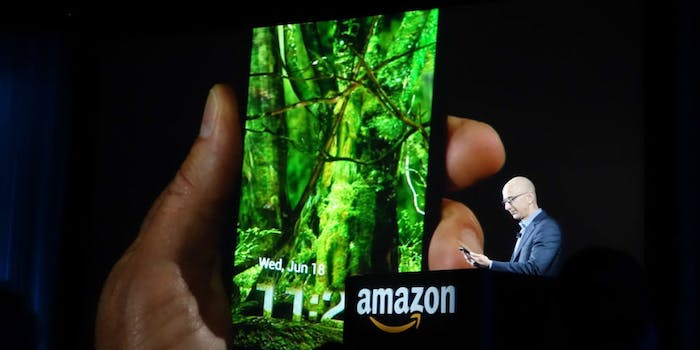 Ahead of iPhone 6 announcement, Amazon drops the Fire phone’s price

With the iPhone 6 just around the corner, Amazon is rethinking strategy for its own smartphone, the Amazon Fire phone. In June, Amazon launched the Fire phone at $199—a surprisingly high price for a company known for viciously undercutting the competition. Now the Fire phone’s price will drop to 99 cents with a two-year carrier contract.

Amazon’s approach to making a phone has been curious from the start. The Fire Phone is absolutely glutted with features, many of which hold no obvious appeal for mobile customers. The device comes with Amazon’s own smart software brain, called Firefly, which mimics some functionality of Apple’s Siri or Google Now. Firefly packs a few pretty neat tricks, but the rest of the Fire phone’s novel features center around a 3D display technology that Amazon calls “dynamic perspective” which puts four pricey front-facing cameras to use. The Fire phone’s hardware is elegantly designed, if uninspired.

Of course, Amazon’s phone isn’t really about hardware at all. Within its ecosystem, all signs point straight to the company’s online shopping portal and Amazon Prime, its premium delivery and media streaming subscription service. If any company could afford to price a premium product at zero dollars out of the gate, it’s Amazon. But why the company waited until the 11th hour to slash the Fire phone’s price remains a mystery.