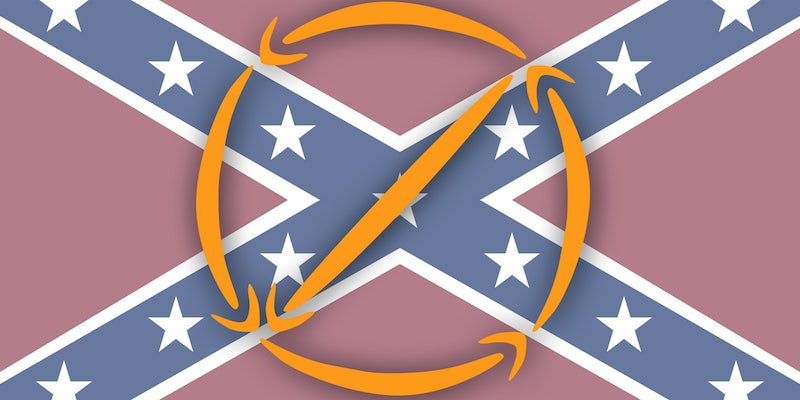 Five major retailers have banned the Confederate flag in a single day.

It’s about to get a lot harder to buy a Confederate flag in America.

This marks the fifth major retailer to distance itself from the Civil War-era symbol in a single day.

The bans come in the aftermath of last week’s race-fueled murder of nine African-American parishioners at Emanuel AME Church in Charleston, South Carolina. Walmart, eBay, and Sears each announced bans early on Tuesday, while DIY marketplace Etsy recently confirmed with the Daily Dot that it would pull Confederate flag products from its online offerings.

“Today, we are removing confederate flag items from our marketplace. Etsy’s policies prohibit items or listings that promote, support or glorify hatred and these items fall squarely into that category,” an Etsy spokesperson told the Daily Dot in a written statement. “With each new application of our policies, we strive to strike the right balance between creative freedom, Etsy’s values, and establishing a safe and respectful marketplace for members.”

Etsy warns that the ban will be difficult to institute, which may lead some “offensive items” to sneak through the censors. Any Etsy member is “welcome to report these items to us,” according to the company spokesperson.

The retailers’ exclusion of Confederate flags and related products comes amid a nationwide controversy surrounding the flag, which flew on South Carolina state grounds the day of the Emanuel AME attack. On Monday, South Carolina Gov. Nikki Haley (R) called for the flag’s removal.

“It’s time to move the flag from the capitol grounds,” Haley said during a press conference on Monday. “For good and for bad, whether it is on the statehouse grounds or in a museum, the flag will always be a part of the soil of South Carolina. But this is a moment in which we can say that that flag … does not represent the future of our great state.”

Sales of the Confederate flag and flag-related merchandise are currently surging on Amazon. Almost 30,000 confederate flag related items are available on Amazon, reports the DailyKos. Sales rose over 2,000 percent for one version of the flag.

Critics of the flag say its deep roots in Southern slavery and oppression during the Civil War era are offensive and distasteful. Photos of Dylann Roof, whom authorities charged with Wednesday’s massacre in Charleston, show the suspected gunman posing with the Confederate flag in his manifesto, further displaying the flags hateful implications of white supremacy.

Retailers aren’t the only one’s denouncing the confederate flag. Over 70 U.S. lawmakers have told the Post and Courier that they support taking the flag down on state grounds in South Carolina.