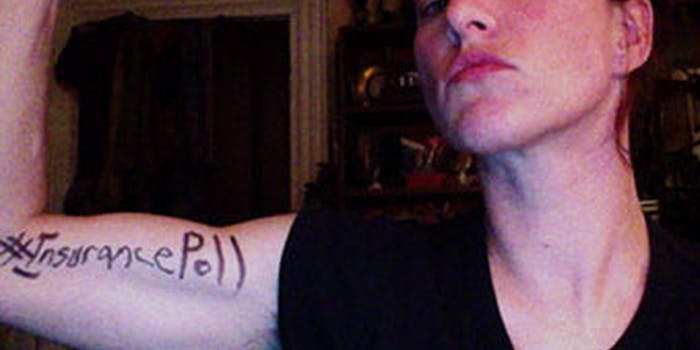 The threat of living without health insurance touches people from all walks of life—from business-savvy Harvard graduates, to aspiring musicians living gig to gig, to everyday Twitter users.

Performer Amanda Palmer watched her uninsured step-brother die from a potentially treatable disease, an experience she relived over the weekend after reading “A Possible Fatal Mistake,” a touching op-ed piece from the New York TImes’ Nicholas Kristof.

The cautionary tale featured the story of Kristof’s Harvard roommate-turned pension consultant who had decided to not buy insurance because “it would be really expensive in the individual policy market.” The decision turned out to be a costly one.

Kristof’s friend Scott Androes is currently suffering from Stage 4 prostate cancer. Androes’ struggles and her family’s own battles with insurance inspired Palmer to tweet her own story to her 698,000 followers.

“[M]ost small-to-mid-level musicians I know don’t have health insurance. some musicians find tricky ways, some pay, most take the risk & pray,” she tweeted. “When I was in my early twenties, buying my own insurance would have been equal half my rent. it just didn’t seem like an option.”

“[My Parents] DEMANDED I get insurance.
we fought.
they offered to pay half.
i agreed.
i was lucky.
many aren’t.
think about it.
#AndVote.”

Palmer’s story received a few touching responses. She wondered out loud on Twitter: Just how many of her followers were struggling with similar insurance problems? The response was overwhelming. More than 7,000 people, including celebrities like Rob Delaney, used the hashtag #InsurancePoll to share their experiences.

“I wonder how many more Americans have been killed by COBRA than by actual cobras,”

Palmer enlisted the help of twitter user Aubrey (@aubreyjaubrey) to break down the stats from as many of the tweets as she could collect. The results were posted on Palmer’s blog:

– preliminary info from first 156 responses indicates 24.5% of US respondents do not have insurance because of cost.

– 31.4% of responses were from outside of US. all but one person had some kind of compulsory of government supported healthcare – (that one person was denied)

– 24.4% of those abroad have some employer/private insurance for optometry and dental. individual costs from $45-$90/month. around $250/mo for a family.

– based on responses, Germany appears to be the only other country with extortionate health care costs.

Palmer has been floored by the response to her tweet and her blog post. She hopes the attention will help inspire real change.

“[C]an you imagine what would happen if EVERYBODY in america (AND the world in contrast) shared their insurance stories and information, and got it trending on twitter, with everybody adding their stories to the pot???” Palmer wrote. “[H]ell, i can’t think of a better way to combat voter apathy, honestly. this shit is real, yo.”