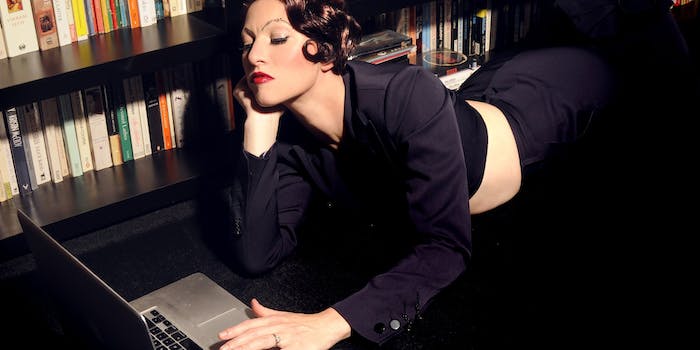 The naked authenticity of Amanda Palmer

The Dresden Doll bares all about her Kickstarter campaign, the power of the Web, and her cross to bear.

Amanda Palmer believes firmly in nudity as a tool for provocation. And she’s been using it a lot lately.

First she appeared, unadorned and unshaven, in a bath tub for her scintillating collaboration with the Flaming Lips, “The First Time I Ever Saw Your Face,” then followed suit with a NSFW stop-motion video, “Want it Back.” In a live setting, she’s even more daring, recently allowing her fans to scrawl over her naked body at an art gallery and, at a live show in Brooklyn, pop her dress made of balloons, slowly uncovering her in the process.

“There’s this thing about being spontaneously naked and viewable from multiple angles, it absolutely means you won’t be flattering,” offered Palmer by way of explanation. “It’s one thing to pose naked in Playboy when you’re prompt and relaxed and Photoshopped. It’s another thing to run around naked in an art gallery and have people snapping pictures on their phones. But that’s also why I love it.

“It’s not about sexiness. It’s not even about nakedness. It really makes people think about what the rules are and why they’re following them. That’s what it really comes down to. It’s about forced authenticity and the surprise. … That’s the magic moment.”

This notion of forced authenticity epitomizes Palmer’s appeal. The dynamic Boston songstress runs a transparent operation, constantly pulling back the curtain – literally and figuratively – to give fans a glimpse into her big-top circus. The former Dresden Doll is prolific almost to a fault on Twitter, hosting flash sales and personally responding to her followers (and critics), while her new band, the Grand Theft Orchestra, recently live-streamed the opening date of its current tour on YouTube.

Palmer’s constant engagement has resulted in fervent fan base, one that chipped in nearly $1.2 million for the recording and promotion of her new album, Theatre is Evil, a full-blown cabaret punk spectacular that marks her most ambitious to date. Her historic Kickstarter campaign is the most funded musical project in the crowdfunding site’s history—nearly doubling the total of her closest contemporary—with pledges up to $10,000 for a private dinner.

On the occasion of her tour to support the album, Palmer discussed Theatre Is Evil, the power of the Web, and her cross to bear.

Daily Dot: Whether it’s on YouTube or Twitter, you seem to have a really personal and ongoing relationship with your audience.

With the success of the Kickstarter, it’s almost been frustrating to explain it to people who haven’t been following the plot for all of these years how genuine my relationship with my audience really is. It feels like a long-term friendship that’s gone through many permutations and chance encounters. It’s a very real and unmanufactured relationship between me and all of these people that have followed what I’ve been going through as an artist.

DD: How do you balance it all: the time you need to uphold that constant engagement and the focus you need as an artist?

It’s a daily mystery. I think the way that I approach my life and time and how I choose to spend an hour of downtime is probably just cosmically different than a normal person might spend there’s. I haven’t seen much television since the ‘80s; I don’t really go out to the movies. If given a choice, I’m more likely to stay up after a show and sign for 500 fans than I am to give into the feeling of exhaustion and go to sleep. And I just make those choices on an ongoing basis. I don’t choose the easy way out.

And it’s the technology has really made it possible. It used to be that that Brian [Vigilone] and I would, in the Dresden Dolls, sign every autograph after the show and then answer every fan email. But the connection sort of ended there. Now that I have Twitter, anytime I have 20 minutes of downtime, I can have mini-conversations with my fans on the fly. Now I can communicate constantly about very real things.

I don’t feel like I’m clocking into work when I tweet with a bunch of my fans. I actively enjoy it. And I’m just built for it. Artists nowadays that are hyper-social have a home-court advantage now given the state of technology.

DD: You once said that you made more money in one hour on Twitter than you did from record royalties. Does that say more about the state of the music industry or the power of the Web?

It is absolutely both. The fact that the Dresden Dolls could have as many fans and have toured as hard as we did and 20,000 records and still never see any money past our original advance showed how record contracts and major label deals were really set up to screw the artist. Whereas Twitter gives you the ability to say, “Hey, look everybody. Tonight I made a thingy. Do you want it?” And everybody raises their hand and says, “Yes.”  And that’s pretty much the end of the transaction. There isn’t a royalty statement a year-and-a-half later coming up blank. There’s an idea and an hour late, $20,000 in your bank account.

DD: On a similar note, your Kickstarter campaign was by far the most successful one by a musician or band. Could others replicate that success?

To be successful at my level, you have to have a lot of really faithful, supportive, and open-minded fans, and it takes a lot of energy to build that. But crowdfunding is just a tool. It’s malleable. So it’s absolutely possible to be a local band with a local following and kick-start a recording for $1500, if that’s what you need to do. You just need to know who you’re reaching out to and what’s possible.

Crowdfunding isn’t a magic bullet. You can’t crowdfund without a crowd, and you can’t start a project from scratch and get people interested in it. You need to have some degree of reach and some small starting point. You need someone to send that link to if you’re going to create it.

But that’s what it’s always been. Musicians have asked me over the years, “How do we become successful?” The story doesn’t change. You write good songs. You put together a band. You get in the band and you suffer. And eventually, if you work really hard, things will start happening. And then to have the right tools to capitalize on what you built. But you can’t skip the hard work. You can’t skip the songs or the shitty gigs. That part never has been easy and it never will be. It’s a cross the artist must bear.

DD: When your fans are the ones funding your album, do you feel more of an obligation to them—to make something that you expect them to like?

I find the question confounding. I always feel like my responsibility as an artist is to make art that I think is good. Period. I know some people will like it. I know some people won’t like it. That’s always out of your control as an artist. But I realized in the early days that you can go many different paths. You can try to make art that will please your label or your audience. Or you can try to make art that you think is good art. I decided to strictly adhere to the latter philosophy and let the chips fall where they may.

The important thing to point out about the Kickstarter was that 25,000 people were willing to plump down money for a record they’d never heard. That says a lot about their faith in me and their relationship with me. They’d been following the story for long enough that they knew they were going to get a quality record. And if it isn’t something that they end up liking, they’re still interested in following the plot. And when I look at the artists that I really respect, it’s not whether or not I like this particular record or not. I’m just interested and fascinated in them as artists. Like Björk, I will listen to every record she makes until the day she dies, even if I don’t like four of them in a row, because I want to hear what she’s going to say and what she’s going to do. I think I have the same sort of relationship with my fans. They’re more interested in me as an artist than they are in getting a perfect record.

DD: But you had everything in place to make Theatre is Evil, a blank slate and a blank check. It should be your masterpiece, right?

I do feel I got about as close to making the record that I heard in my head, which is all you can really ask for as a songwriter. You hear what’s possible and then you just pray you can find the personnel and the studio to get the sounds that you envision. I hit it about as close as possible.

This interview originally appeared in the Austin Chronicle.