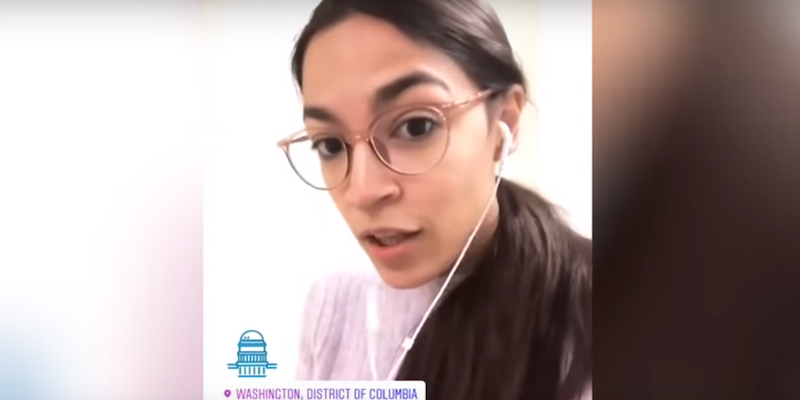 She's pushing back on criticism of her Instagram livestreams.

At 28, Representative-elect Alexandria Ocasio-Cortez (D-N.Y.) has become a leading progressive voice partly because of her digital-age savvy, and the transparency she presents during Instagram livestreams brings unique criticism. She also knows that as the youngest woman ever elected to Congress, her political opponents are looking for cracks.

“Cognitive dissonance is Republican commentators stalking, doctoring, + editing my casual livestreams out of context in order to sow doubt in my intelligence,” she tweeted late Wednesday.

Early this week, she wrote that Republicans are “drooling” to attack her after a gaffe: She said “three chambers of government” during a livestream when she apparently meant three branches of government. Ocasio-Cortez was stumping for Democrats in 2020.

It’s not just members of the GOP like Ohio Rep. Niraj Antani tweeting about her, or pundits attacking her fashion as a strike against her working-class folklore. This week, comedian Jen Kirkman said in a tweetstorm that Ocasio-Cortez was helping Russia stir up online chaos in a widely criticized conspiracy theory.

This summer, conservative media outlet CRTV posted a fake interview with Ocasio-Cortez that spliced her answers on PBS’ Firing Line with its host Allie Stuckey. It was a Jay Leno-era comedy bit to be sure, but CRTV did not tell its audience that it was a gag. That same PBS interview also caused an uproar on right-wing media sites.

Ocasio-Cortez also shouted out Ariana Grande on Wednesday. Her brand of transparent, relatable activism seems to be connecting with supporters.

Currently watching the latest Instagram live story from @Ocasio2018 and she addressed a question I asked on faith and politics, and it's just so great to be able to interact with a politician like this. I really hope this becomes more widespread in the near future.