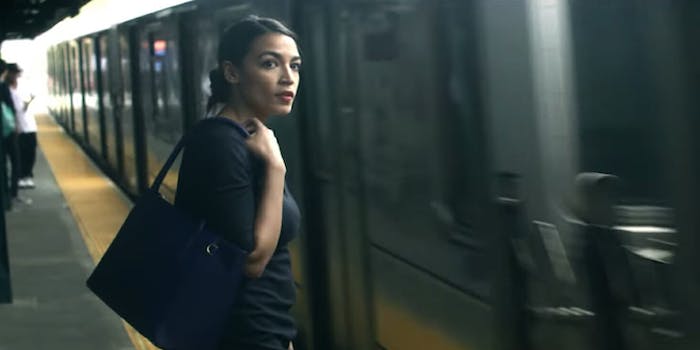 Everyone is afraid of Alexandria Ocasio-Cortez

Following her decisive victory in the Democratic primary race in New York’s 14th District, Alexandria Ocasio-Cortez has become a household name. As the first candidate endorsed by the Democratic Socialists of America to capture the midterm election narrative, she also has a target on her back. Conservatives (and even some Democrats) can’t stop taking shots at her.

It is clear that the forces of status quo conservatism are afraid of a rising crop of progressive candidates, and it is their hope that derailing Ocasio-Cortez could slow the momentum of what looks like a left-wing wave.

Though most of the attacks on her thus far have been fairly clumsy, it is clear from their sheer volume that the right won’t be dragged into the terrifying future of universal healthcare and fair housing without a fight.

Whoopi Goldberg clearly knew she was lobbing a grenade when she brought up Ocasio-Cortez’s platform on last week’s episode of The View. As soon as her name was mentioned, Meghan McCain, the show’s resident conservative, immediately launched into the litany of anti-socialist talking points you’ve heard from your uncle, including raising the specter of Venezuelan socialism and extolling the virtues of hard work.

Meghan McCain, of course, is the daughter of Senator John McCain (R-Az) and inherited massive amounts wealth and status in the political world from her father, which she then parlayed into a career as a conservative political talking head.

Joy Behar sounded like a campus radical responding to McCain’s talking points, standing squarely in Ocasio-Cortez’s corner, and readily rattling off a list of countries where socialist principles have been successful

We welcome the dictatorship of Comrade Joy.

.@conservmillen grills congressional hopeful and progressive “it girl” @Ocasio2018 on her socialist agenda and knowledge of government… or lack thereof.

Conservative Review TV (CRTV) is yet another right-wing digital platform you’ve never heard of that keeps most of their content behind a paywall where no one will ever look at it. CRTV graciously gave us a peek at their premium content this week, when they took an artless shot at Ocasio-Cortez.

A segment featuring host Allie Stuckey was spliced in with a PBS interview with Ocasio-Cortez to make it look like they had appeared together. After the “interview” racked up more than a million views and several reporters pointed out the interview was faked, the site added a disclaimer reading “Hilarious satire!”

The interviewer does “hilarious” things like making Ocasio-Cortez’s critiques of America sound like they are criticisms of Venezuela and misrepresenting her complaints about welfare inequality.

As the Intercept pointed out, if this was an attempt at satire, many of CRTV’s fans were not in on the joke.

One of the funniest attempts at a hit piece on Ocasio-Cortez so far was “I’m a Conservative and I went to an Alexandria Ocasio-Cortez Rally,” published this week in the Daily Caller by writer Virginia Kruta.

The piece first attempts to prepare you for a meeting with a socialist bogeyman by listing topics from various bits of small talk Kruta hears from the audience: Ferguson, ICE, Palestine, and Assata Shakur are all mentioned.

Then Virginia delivers the death blow. She writes:

“But then Ocasio-Cortez spoke…and I saw something truly terrifying. I saw just how easy it would be, were I less involved and less certain of our nation’s founding and its history, to fall for the populist lines they were shouting from that stage.

Kruta then went on Fox and Friends to double down on the piece, which made the whole thing even more hilarious.

Daily Caller writer recounts going to Alexandria Ocasio-Cortez rally on Fox & Friends: "They say things — I mean, they talk about things that everybody wants, especially like if you are a parent" pic.twitter.com/bujOEbuLbD

Alexandria Ocasio-Cortez: "We will not rest until every person in this country is paid a living wage to lead a dignified life." pic.twitter.com/6u73x2kyVI

Another attempt at attacking Ocasio-Cortez fell flat when the FOX Business Twitter account attempted to scare their viewers by sharing a 17-second video accompanied by a quote from Cortez, “We will not rest until every person in this country is paid a living wage to lead a dignified life.”

That feels more like something we would see on an inspirational poster than anti-socialist propaganda, but what do we know?

After making headlines this week for saying of Ocasio-Cortez, “This girl, Ocasia-Cortez [sic] or whatever she is, is in a totally different universe,” DeSantis decided to hit FOX News to double down on his insensitivity.

This is the Yorktown Heights (very nice area) home @Ocasio2018 grew up in before going off to Ivy League Brown University.

Due to some crucial shoe-leather reporting from Newsmax host John Cardillo, we found out that Alexandria Ocasio-Cortez grew up in…a house.

Perhaps the best attempt at an Ocasio-Cortez takedown was one of the earliest. Sean Hannity put up a graphic outlining her major policies intended to scare viewers. Instead, the image went viral when the internet thought it all looked pretty reasonable.

Whether Alexandria Ocasio-Cortez will be hurt by any of these attacks remains to be seen, but considering their quality thus far, it looks like she is going to be just fine.