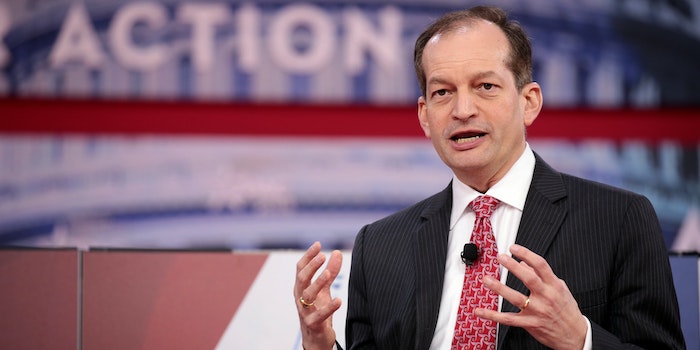 There had been calls for Acosta's resignation.

Acosta’s resignation comes amid numerous calls from Democrats who wanted him to step down from his administration post in light of his involvement with a 2008 plea deal given to Jeffrey Epstein, the billionaire who was recently arrested on sex trafficking charges.

The plea deal allowed Epstein to avoid federal charges if he pled guilty and served 13 months in jail.

BREAKING —> @SecretaryAcosta is resigning, @realDonaldTrump tells reporters at WH. Trump said Acosta called him this morning and that it’s the secretary’s decision, per pooler @anniekarni

Acosta called the president on Friday morning and told him his decision to step down, according to a pool report. Trump added that Acosta was a “great” labor secretary.

Earlier this week Acosta defended himself on Twitter and in a press conference, where he was criticized for saying that “today’s world treats victims very, very differently” when asked if he’d make the same deal as the one struck more than a decade ago.

Epstein pled not guilty to trafficking charges earlier this week after he was arrested by authorities.