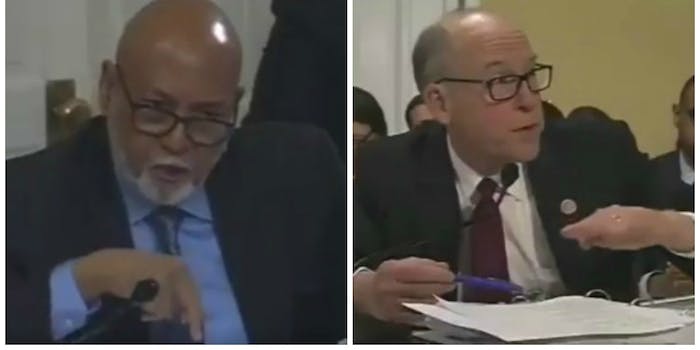 After being shushed during Trumpcare debate, congressman fires back

The House of Representatives is set to vote Friday on the American Healthcare Act, a bill that would repeal Obamacare and potentially not cover pregnancy while giving less support to older and poorer Americans.

And Rep. Alcee Hastings (D-Fla.) is pissed about it.

During a House Rules Committee hearing on Friday morning, Hastings said he was “mad as hell” about Republicans’ seeming indifference about reducing coverage to older Americans who use Medicaid. As the Washington Examiner notes, Hastings asked Rep. Greg Walden (R-Ore.) if he was comfortable with reducing Medicaid, and Walden said he didn’t care for the “insinuation that we don’t care about people on Medicaid.”

Then the two got into an exchange where Walden asks for the tone to be taken down a notch. Watch Hastings’s reaction to that.

Wow @RepHastingsFL when asked to tone down, "I don't have to be nice to nobody when you're being nasty to poor people" #ProtectOurCare pic.twitter.com/It0R8qlEmJ

The nonpartisan Congressional Budget Office said the AHCA would take away insurance from 14 million people who are currently using Medicaid. Walden said Friday he doesn’t believe that figure.

Hastings, though, wasn’t done Friday. And he saved his best fastball for the House floor.