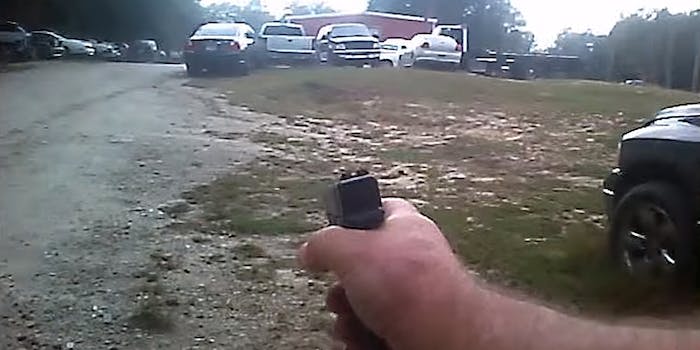 A grand jury declined to indict both officers involved in the shooting.

Six months after police in Eufaula, Alabama, fatally shot Cameron Massey in 2013, a Barbour County grand jury declined to indict two officers in the shooting. But newly released body-camera footage is leading many to question that decision.

Massey, 26, had been the passenger in a car stopped by police—a car that was later found to contain seven pounds of marijuana—and police shot him five times because, they said, they believed he posed a grave danger to them.

After the grand jury’s decision, Eufaula Mayor Jack Tibbs said, “The officers fired upon Mr. Massey to stop the imminent deadly threat posed by Mr. Massey’s actions, which halted his continued ability to accelerate the vehicle and seriously injure or kill the officer being dragged.”

The mayor claimed that Massey hit the accelerator on the black Infinity in which he was a passenger, causing one of the officers to be dragged. But the body-camera footage shows something different.

“Officers cannot just shoot people based on absolutely irrational perspectives about a scenario,” Mario Williams, the lawyer for the Massey family, told BuzzFeed. “This was an absolutely unreasonable shooting.”

Massey’s family last July filed a civil suit against the Eufaula Police Department, including former Police Chief Ralph Conner, who was wearing the body camera and who is now retired, and officer John Phillips, who originally made the traffic stop. Phillips said that an informant had told him that a vehicle fitting Massey’s car’s description was driving marijuana through the city.

Phillips was standing on the driver’s side and was apparently in danger of being run over. But Massey’s family has said that the officers were beside the car and not in front of it—and therefore that they were not in danger of being struck by the vehicle.

The body-camera video does not appear to show Phillips being dragged when the car accelerates.

“It was the officer who was reaching inside the the car,” a spokesman for the family said. Massey “was on the passenger’s side even up to his death. He was still in his seat belt with both feet on the floor.”

Phillips went to the driver’s side of the car. He reached in and grabbed Massey, he told investigators. Phillips said that Massey shifted the car to “drive” and hit the gas pedal with his hand. The car jolted forward a foot or two and Conner fired, the video appears to show. Williams asserts that Conner fired before the car moved.

“Everything was so quick, so instantaneous,” Phillips told investigators. “At that time, I didn’t know if [Massey] had shot and he’s trying to stay down to keep from us returning fire.”

Phillips, who said he was still leaning in through the driver’s side window, fired four shots, as the car kept rolling, slowly up the dirt road for about fifteen yards before crashing into a row of parked vehicles in front of the auto body shop.

“When the car started to move, it was such a jolt,” Phillips told investigators. “I thought the back tires was gonna get my leg and snatch me under the vehicle.”

BuzzFeed also reported that Conner shot 22-year-old Bobby Joe Sales, an unarmed black man, in 1983 after Sales fled during a police stop. Sales survived and Conner was not charged.