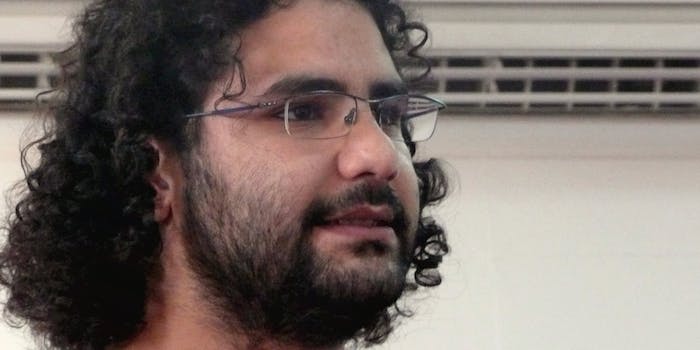 Why does the Egyptian government keep jailing this blogger?

When the internet mixes with activism, the results can be tremendous. It can also have tremendous downsides.

When the internet mixes with activism, the results can be tremendous, as seen in Egypt during the Arab Spring in 2011. There, a loose coalition of opposition groups organized via Facebook and overthrew the government, even after Hosni Mubarak’s regime pulled the plug on the internet.

However, the backlash for those using new technological methods to protest a regime can also be very extreme, as was the case for Alaa Abdel Fattah. Fattah was a well-known blogger and activist who was arrested as part of a mass crackdown on protests, which came after President Abdel Fattah el-Sisi’s declared a state of emergency in 2017 after several terrorist bombings.

It’s just the latest in a string of arrests that are tied to Fattah’s activism in Egypt.

Fattah was instrumental in developing Arabic language versions of software during the Arab Spring and co-founding Egyptian blog aggregators Manalaa and Omraneya, the first Arabic aggregators which hosted blogs without censorship or exclusion.

He was also a very public figure during the 2011 protests in Egypt which rocked the Arab world.

Fattah has been detained by every ruling Egyptian leader during his lifetime, including Mubarak, Mohamad Morsi in 2012, Adly Mansour, and the current president, al-Sisi. He is in prison now, held under preventative detention without charge. According to family members, he is contemplating suicide as his physical and mental health deteriorates.

Fattah was arrested most recently in a crackdown on protesters against al-Sisi’s government which, his family says, he took no part in. He is being held in Tora prison, under conditions so severe the Cairo Institute for Human Rights drafted a letter to the Red Cross. The group said he and other prisoners were being denied basic necessities such as clean water, exercise, and food. He has been held for more than two years.

al-Sisi recently lifted a state of emergency for the first time since 2017, which granted the government powers to make sweeping arrests. However, it is not clear how or if this will affect Fattah’s detention.

Fattah does not have access to reading materials and is only allowed visitors once a month for 20 minutes at a time. He was in court recently, where he was denied release. His request for increased visitation rights was also shot down.

Jillian York, director for international freedom at the Electronic Frontier Foundation (EFF), is a friend of Fattah, and said his work was a huge inspiration for her.

“He’s a really, really thoughtful and kind human being, but he’s also a true believer in his politics. He’s someone who’s definitely loud and opinionated and very influential,” York said. “I think that’s a lot of the reason why he poses such a threat to the Egyptian government.”

York says the EFF involvement with Fattah goes back a “really long time.”

Fattah has written about human rights and politics for outlets such as al-Shorouk and Mada Masr in Egypt. He was a vocal critic of el-Sisi’s using military trials on civilians as a way to fight dissent. He was an advocate for the distribution of computer technologies, including co-founding an Egyptian Linux user group as an open-source software developer. He was a lead developer on Pootle, a utility that made translating software into different languages easier.

All activities in a country that doesn’t have strong free speech safeguards, making it easy for any act to be deemed suspicious.

“We regularly take on cases of people whose rights have been violated just for their online speech,” York said. “But we firmly believe, and I think most of his legal team does as well, that he’s being scapegoated, being made a pariah because he was such a prominent figure online and offline.”

In 2014, the EFF filed a petition with the United Nations Working Group on Arbitrary Detention. When Fattah was re-arrested in 2019, it called for his immediate release along with other activist groups in a letter to the Egyptian authorities.

There has been a pattern of Fattah being arrested and then re-arrested by the Egyptian government since the Arab Spring. He was arrested in November 2013 for allegedly organizing a protest without a permit. Although he was released on bail on March 23, 2014, he was sentenced in June 2014 to 15 years. He served a five-year reduced prison sentence until March 2019. Finally, he was re-arrested in September 2019, without charge.

The EFF is not the only internet rights group with ties to him.

Valeria Betancourt, communications and information policy program manager at the Association for Progressive Communications, called Fattah a “long-time friend” and said persecution against activists who use online platforms and blogging is very pervasive.

“Alaa is an important voice to defend in the context of an increasing crackdown against digital rights defenders, including security researchers, developers and trainers, and freethinkers, worldwide,” Betancourt said. “We have seen the detrimental effect of this crackdown in many contexts, both online and offline, including through the judicial harassment of Philippine journalist Maria Ressa, also a friend and partner of APC, who was recently awarded the Nobel Peace Prize, and the persecution of security expert and human rights defender Ola Bini in Ecuador.”

Fattah and his family have long been entrenched in the activist community. His father was a human rights attorney, his mother was a political activist and professor, and his sisters started an independent newspaper during the Arab Spring.

The Daily Dot spoke to Ali Abdulemam, a friend of Fattah’s, who started a website in 1998 called Bahrain Online and who was sentenced in absentia by a military court for 15 years, accused of trying to bring down the government in Bahrain during the Arab Spring.

Abdulemam’s experience parallels Fattah’s, save for the fact he was able to escape to the United Kingdom. He said he first met Fattah at a conference for bloggers.

“When we talked, I noticed that this guy is a really dedicated, knowledgeable person, who knows what he wants. And he shared the same ideas, the same concepts that we wanted for Bahrain and he wanted for Egypt,” Abudelmam said. “And there are other activists, online activists, from other countries who share the same views that we need to change. There’s something wrong with our countries that needs to be corrected.”

Abduelman called Fattah a “freedom fighter” and had a message for him.

“I’m proud of him. Proud that I know him. I’m proud that our paths came across several times in the past and I wish that he would be released very soon. I’m really terribly sad about the situation that he has to spend this many years in [prison],” Abduelman said. He stressed the need for people to talk about this case and about others in similar predicaments.

“We need them to be released and honored, not to be tortured,” Abduelman said.