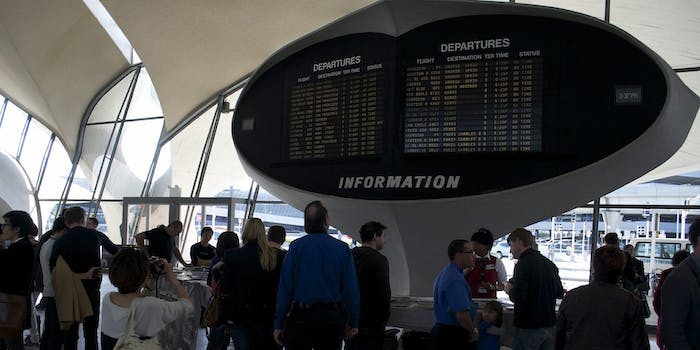 The cause of the outage is not yet known.

Computer systems for Customs and Border Protection have been reported down at airports in several major U.S. cities, including Boston, Dallas, and New York City.

The cause of the malfunction is not known. A U.S. customs operator would not immediately confirm the outage, but told the Daily Dot that he’d received numerous phone calls from “all over the country” concerning a problem with the agency’s computers.

LAX confirms their customs computers are currently down. Similar reports from major airports across the country.

Charlotte airport, every passport/customs Kiosk is down. Somehow, I made my connecting flight!

Entire Immigration and Customs computer system down nationwide. What country is this again?

Epic line at @BostonLogan immigration. Rumor is all computers down. Some still on jetways. No movement in 30 min pic.twitter.com/1BZxkq0wxh

Update 9:56am CT, Oct. 15: Federal law enforcement officials said the computer outage, which lasted for approximately 90 minutes, affected terminals used to check airport passengers against the U.S. government terrorist watch list. The cause of the outage has not been revealed.

“U.S. Customs and Border Protection experienced a temporary outage with its processing systems at air ports of entry in the United States and took immediate action to address the technology disruption,” the Department of Homeland Security said in a statement late Wednesday.