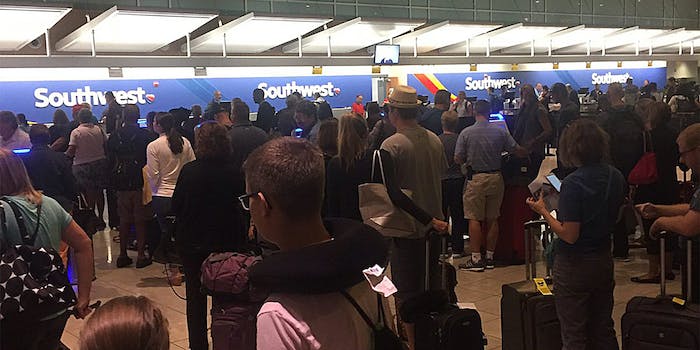 The network problem appears to have been fixed.

Air passengers were left waiting in line at check-in desks on Thursday morning when a widespread system failure slammed airports around the world.

Airports now claim the issue has been resolved, but not before some passengers were forced to wait in line for nearly two hours.

@Qantas what is the issue at Hong Kong airport. Is it affecting all your systems. Or just HK

Computer problems with @Lufthansa check-in computers. Flights delayed, at least out of TXL.

Glad I checked-in on the Lufthansa app! #travel

'System wide outage' on PA at #Qantas bris domestic terminal w 'boarding system down' on all flights. My flight then boarded but no updates

“A small number of airlines are experiencing problems across the world and we’re working closely with them to solve the issue,” said a spokesperson at London’s Heathrow Airport. The departure boards at Heathrow reportedly showed flights delayed between half an hour and an hour, according to the Daily Mail.

Gatwick Airport, south of London, said it experienced a “momentary IT glitch” that only lasted 15 minutes and didn’t cause flight delays.

A spokesperson for Amadeus said: “During the morning, we experienced a network issue that caused disruption to some of our systems. Amadeus technical teams took immediate action to identify the cause of the issue and restore services as quickly as possible. That action is ongoing with services gradually being restored. Amadeus regrets any inconvenience caused to customers.”

While things appear to have returned to normal, this latest technical glitch shows just how reliant critical services are on linking to a stable and safe network—and what can happen when that fragile connection fails.