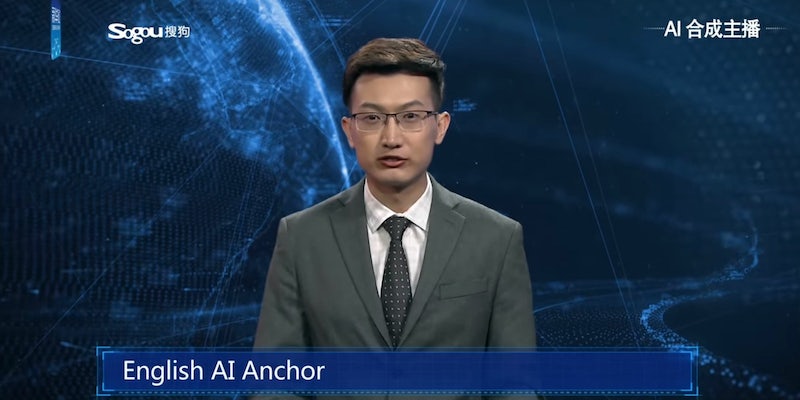 Just because you can, doesn't mean you should.

No job is safe from robots—even the Daily Dot’s. China’s state media debuted a new AI virtual news anchor designed to deliver news 24 hours a day with an eerie sense of realism.

Xinhua, the Chinese government’s official state media organization, debuted the virtual anchor Wednesday at a conference in the city of Wuzhen.

“Hello, you are watching English news program. I’m AI news anchor in Beijing,” the AI says in a demo reel posted by Xinhua on Twitter before launching into a series of brief news stories.

Xinhua AI anchor, launched on Wednesday, starts presenting news reports from Thursday. In this program, he takes you to have a look at what a Panama official and the Chinese businessman Jack Ma say about the ongoing #CIIE. pic.twitter.com/OZkRQtv1sQ

The reel itself is mostly b-roll corresponding to the various stories, so the reel is far more of an audio-based demonstration than a visual one. That said, the few glimpses of the virtual anchor in a classic suit and tie are pretty impressive. He’s not exactly emoting very convincingly (most anchors wouldn’t), but the level of detail is quite surprising—from the shadows on the anchor’s suit to the individual hairs on his head.

The anchor is able to get through a number of stories without any major issues, but it’s far from being mistaken for a real human. You can hear it in the inflections and the way it sometimes doesn’t rest or breathe between sentence fragments.

“The development of the media industry calls for continuous innovation, and deep integration with the international advanced technologies,” the AI anchor says in a separate video. “I will work tirelessly to keep you informed as texts will be typed into my system uninterrupted. I look forward to bringing you the brand new news [sic] experiences.”

In a moment of uncanny valley horror, you’ll notice the AI anchor slipping into a slack-jawed expression right after finishing his statement in the video above.

The anchor is modeled after the real-life Xinhua anchor Zhang Zhao. The BBC has noted that “it appears that photo-like facial features have been applied to a body template and animated.”

Xinhua is specifically looking to “reduce news production costs and improve efficiency.” According to CNN, Xinhua hasn’t said whether any of China’s other state-run media channels are interested in acquiring the technology.

For decades, China has exercised an extreme level of authority and censorship over its country’s media organizations, including social media and other platforms. A report by the Intercept in September stated that Google is willingly tying search engine usage to the phone numbers of individual citizens, allowing the government to track who searches for controversial content.