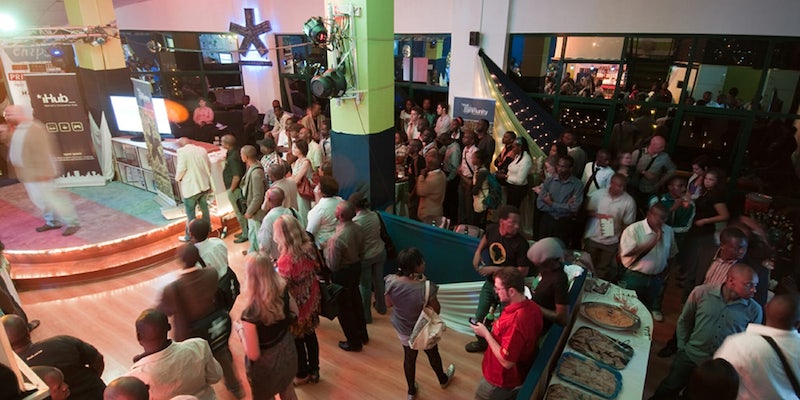 The rise of the machines.

From the Centre Songhai in Benin to the Hypercube Hub in Zimbabwe, there are tech hubs, business incubators, hacker spaces, and maker spaces, all of which serve as indicator species for the health of Africa’s tech ecology. They offer collaborative spaces for programmers, nerds, entrepreneurs, and designers who can usually join on an affordable sliding scale and gain access to excellent connectivity, technology, and training.

The big question is, why? Why has this specific expression of the continent’s digital zeitgeist come out on top? How was it even possible?

As Dr. Nithaya Chetty, the deputy CEO of South Africa’s National Research Foundation, said about that country’s Square Kilometer Array telescope, large scale technological movement in Africa has become possible because of a number of ICT elements that have only recently come together: improvement to high speed computing, advancements in material sciences, increasingly affordable connectivity, and the growth of fiber optic cable on the continent, including submarine cable systems.

But why, in particular, have shared spaces devoted to collaboration and digital creation, with funding, education, or both, taken such a bellwether position in Africa’s tech scene?

To find out we asked those at the forefront of the trend. We spoke with Fiifi Baido, co-founder and CTO of Ghana’s iSpace and Leonard Imene, research development officer at the Namibia Business Innovation Centre (NBIC).

Perhaps unsurprisingly, the number one reason for the explosion of tech hubs and related institutions is money.

“Africa is recently benefiting from many external NGOs and philanthropists who have seen the many opportunities in Africa,” Baidoo told the Daily Dot. “They have contributed to the many tech hubs that are springing up these past few years. Most of these hubs receive majority of their funding from outside their home countries.”

It is not just nonprofits who are interested. Investors across the world now see Africa as a place for profits. According to the Economist, earlier this year the first Africa-focused investment fund, London-based Helios, topped $1 billion. Given Africa’s past as a target for extractive resource economics, some are worried about a nascent neo-colonial mindset.

Hubs like Strathmore University’s iLab are aware of, and take measures against, such a return. Investors in the iLab have first look rights, but the developers involved are free to refuse licensing deals and even if they accept them, retain the IP of their projects.

Although internal investment in Africa’s high tech scene is growing, it is still very much secondary to European and North American funding. As Kenyan entrepreneur Chris Asego told ZDnet, the industry is still too young for Africans to feel very comfortable taking that kind of risk.

Although the picture of Africa in the eyes of the West is still more often cartoonish than not, it doesn’t mean the continent is without its struggles. Education is one of them. In a huge continent, with 1 billion people, 60 percent of whom are under 30, thousands of languages, a history of exploitative colonialism, and a lack of advanced infrastructure, education can be spotty and even more widely vacillating in quality than in a country like the U.S., where the variants are not inconsequential.

Tech hubs offer an opportunity to secure excellent advice and training in a number of different modes, ranging from standard lectures, to bar camps and hackathons, to just plopping down in someone else’s group and hearing how they’ve solved similar problems to yours.

A hub’s offerings and goals vary, but can include research and education, entrepreneurship, capacity building, collaboration, and access to funding. Ideas developed in the tech hubs are expected to present opportunities to become successful businesses in the local community.

The spirit of collaboration, in particular, seems to be the axis a tech hub turns on. Cross-pollination of ideas is a benefit of the open and modular nature of most tech hubs. It also offers a head check to people who may have extremely creative ideas, but no sense of the market available to them.

“Growth of hubs will eventually slow down,” said Baidoo, “that is if they have not slowed down yet. The existing hubs will change focus a little bit from providing infrastructure to providing services to create the required ecosystem.”

Imene believes the growth period is still in effect, especially in Nigeria, South Africa, Kenya, Ghana and Uganda. What it will take to keep that growth going, and to make hubs more effective, is government involvement, said Imene. Baidoo notes that his hub has not received any governmental contributions since it launched in 2012. The iSpace, he said, costs $40,000 to $76,000 per year to maintain. The NBIC costs just under $50,000 per year, most of that carried by the polytechnic which houses it.

When visiting Kenya in 2012, I had a conversation with a financial member of the administration, asking him if he’d ever visited the iHub, possibly the most prominent hub in Africa. He had not and knew virtually nothing about it. He said he feared such hubs were of minimal utility to the young people of his country, saying he thought they would all go drop their startups and wind up with Deloitte & Touch or IBM anyway.

Clearly, government in Africa and those who populate its tech hubs are not speaking the same language, even as the number of hubs increase, and attract attention both within and outside of the continent.

“As the world move towards digitalization,” said Imene, “the tech hubs will enable local entrepreneurs to commercialize the local-based solutions that can also be implemented at regional and international level. Innovative mobile application ideas do exist, all needed is an effective coordinator between idea owners or developers to bring about progressive change.”

Due to the increase in speed and affordability of connectivity, the sense of possibility the digital world has provided, and interest by investors, tech hubs, business incubators, hacker spaces, and maker spaces are providing places for the continent’s young (and not so young) people to express their innate creativity and ambition, make up for disparity in educational opportunities, allow for the creation of wealth that is more sustainable than the resource extraction of the past, and help to produce products and services to address the needs of their communities.

One thing that is hard to capture when writing about tech hubs and their ilk is the sense of hope, of excitement, possibility, and creativity they capture and amplify. They are part youth club, part university. They combine free range creativity with practical concerns for social fixes. They are both wild eyed and hard boiled—and they don’t share as much in common with similar centers in the United States as you might think.