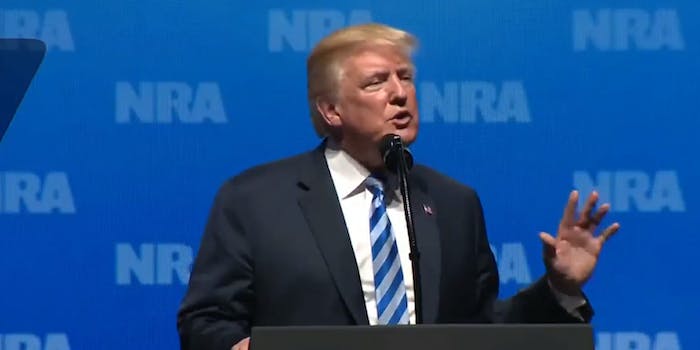 The wildest things Trump said at the NRA Leadership Forum

There was a lot going on.

President Donald Trump spoke to the National Rifle Association (NRA) Leadership Forum on Friday, giving a speech that, at times, sounded more like a political rally than an address to supporters of the Second Amendment.

The speech, which lasted around 45 minutes, touched on several hallmarks of speeches Trump has made in front of large, supportive, crowds: immigration, his election victory, Special Counsel Robert Mueller, and future elections. In fact, the speech was similar to one that he gave to CPAC in February.

Eventually, the president did speak about guns—and the school shooting in Parkland, Florida earlier this year—but did not delve into the gun reform proposals he brought up publicly following the shooting.

Here’s some of the things Trump said on Friday afternoon:

1) He wants to hold a rally in Washington D.C.

Early in his speech, Trump reminded the NRA members that this was the “all-time record crowd” to attend the event, adding that it is “nice to set records.”

Later, he took that idea further–suggesting that the NRA hold a rally in Washington D.C.

“Can you imagine if we ever called for a rally in Washington D.C.?” he asked the crowd. “There wouldn’t be enough room… We have a lot of love going on.”

People on Twitter were quick to point out that Trump did have a rally in Washington D.C., which wasn’t well attended.

Trump to NRA: Could you imagine if we had a rally in Washington DC? There wouldn’t be enough room.

The president did have a rally in Washington DC. It was his inauguration. There was plenty of room.

“It seems that if we’re going to outlaw guns, like so many people want to do: Democrats,” he said. “You know what we’re going to say: We are going to have to outlaw, immediately, all vans and all trucks, which are now the new form of death for the maniac terrorists.”

"If we're going to outlaw guns, like so many people want to do … we are going to have to outlaw – immediately – all vans and all trucks, which are now the new form of death for the maniac terrorists." pic.twitter.com/kwmjYH2g7Q

3) Trump shows some anxiety about the 2018 midterms

The president, looking ahead to November when Americans will vote in the midterm elections, told the crowd that they cannot get “complacent” and let Democrats gain seats in Congress.

“Like 90 percent of the time, you win the presidency and, for whatever reason, you lose the midterm,” he told the crowd. “We can’t let that happen. The word is ‘complacent.’ I kept thinking to myself ‘oh why is that? I wonder why? Think about it: you win, you have this great win, now you take a breath. You relax. All of a sudden two years is up—they’re fighting like hell and you’re complacent. We cannot get complacent.”

"History says when you win the presidency, you get complacent," @realDonaldTrump tells NRA crowd. "We cannot get complacent. We have to win the midterms."

Toward the end of the speech, Trump said “political people” told him not to speak before the NRA, adding it may be “controversial.”

The president recounted the alleged conversation to the crowd:

“Before I left today, a couple of people came up to me—good political people—they said ‘you know, going to the NRA convention and speaking… that’ll be very controversial. It might not be popular.’ You know what I said? ‘Bye bye, I gotta get on the plane.'”

Trump says some "political people" told him it would be controversial for him to speak to the NRA today. His response, he says: "Bye bye, gotta get on the plane!"

5) Continues his push for arming teachers

The president also brought up his idea to arm teachers in the wake of the Parkland shooting. The plan, which has faced quite a bit of criticism, would prevent shootings because they would be in “gun-free zones,” he told the crowd.

Trump also blasted “gun-free zones,” saying that there is nothing “more inviting to a mass killer than a sign that declares this school is a gun-free zone, come in and take us.”

"There's no sign more inviting to a mass killer than a sign that declares this school is a gun-free zone, come in and take us." https://t.co/WmrMBovplx pic.twitter.com/ldKHSYtosB

He left the stage to “You Can’t Always Get What You Want” by The Rolling Stones.

You can watch all of his remarks here.