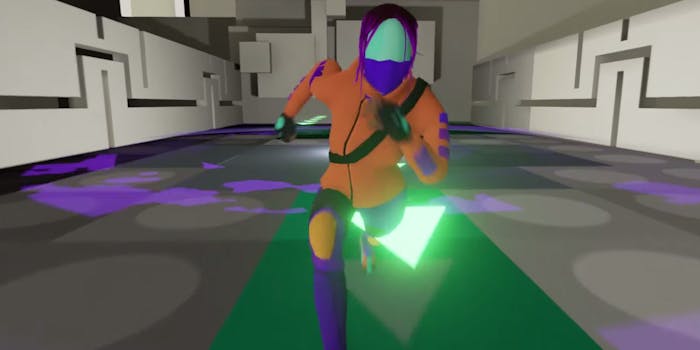 There's nothing like dodging a giant, evil Verizon logo.

The game, called 404sight, is the brainchild of a group of University of Utah graduate students who go by the name Retro Yeti Games. They warn that, even though the Federal Communication Commission recently adopted new rules to keep ISPs from choosing which networks can receive full-speed service, people should still worry about preserving net neutrality anymore.

The actual gameplay, Retro Yeti says, is akin to 2008’s Mirror’s Edge, in that it mostly focuses on how a character runs and jumps in space.

To that end, the player’s character can even run through both fast and slow lanes, mirroring the experience of an Internet user in a world without net neutrality.

“Then there’s the giant floating ISP in the sky,” Kalinger said. “It’s literally a giant red orb with a combined Comcast and Time Warner [Cable] logo on it. This is the source of the slow lanes. Not very subtle.”

404sight, which recently received a $13,000 grant from Epic Games, is scheduled for a free PC release on April 16, with Mac availability in the pipeline.