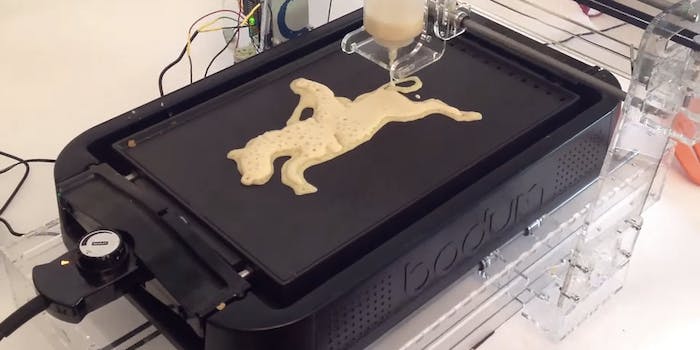 The future of 3D printing is a machine that makes pancakes

Don't pretend you're not excited about this.

If you had a 3D printer and had the power to make anything you wanted at a moment’s notice, what would you make? An orchestra’s worth of instruments? A state-of-the-art prosthetic hand made from your own skin cells, for a child who’s just been injured in a car accident? Or delicious ricotta, lemon zest, and blueberry pancakes for you to put in your tummy?

If we’re being totally honest here, I think most of us would probably opt for the latter. And now we can with PancakeBot, a 3D printer that allows you to draw and design your own pancakes.

Check out this epic video of the PancakeBot in action, appropriately scored to the equally epic “William Tell Overture”:

The idea for the machine took root back in 2010, when designer Miguel Valenzuela read about a a British designer who’d created a model for a pancake stamping machine out of Legos. When he told his daughters about it, they got so excited that he knew he had to make a similar machine.

Eventually, Valenzuela came up with two versions of the PancakeBot: One that was made out of Legos (which is so adorable that you’d think there’d be a law against it), and one that isn’t.

The non-Lego machine’s body is made out of acrylic, and two motors and drives control the location of the batter, and how much batter is dispensed. The Lego machine is mostly used as a demo when Valenzuela presents at schools, where he aims to inspire kids to develop a passion for engineering and programming, as well as creating and having fun with their food.