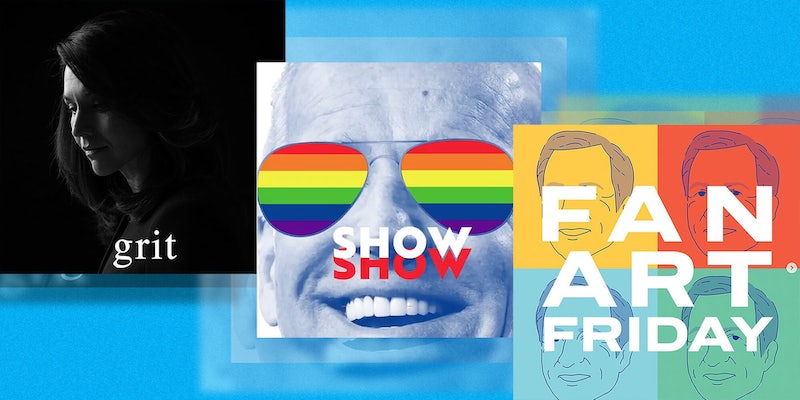 The corniest of corny posts from the 2020 Democrats.

When you take a cohort of mostly white, mostly older, mostly rich, mostly male politicians and make them prove to an astonishingly small group of people in the United States that they are somehow a champion for underrepresented communities and capable of defeating President Donald Trump, things are bound to get uncomfy.

Remember when former Rep. Beto O’Rourke and Sen. Cory Booker (D-N.J.) tried to out-speak Spanish with each other during the first debate, and then Tim Ryan rambled off a checklist of identities? Yeesh.

And it’s only worse on the internet.

Online, cringey moments are less akin to a candidate revealing their uninformed and harmful opinions, and more indicative of how digital campaigns want a candidate to seem, even if that means being cringey on purpose. Perhaps they’re not as problematic as the moments of racism, sexism, and general ignorance that the media captures on the campaign trail. But they’re exhausting in other ways.

Sen. Michael Bennet (D-Colo.) and Andrew Yang got into an eye-roll-inducing “feud” over Twitter in the days before the first Democratic debate last summer. Biden tweeted out his annual #BestFriendsDay photo (or digital rendering?) of his and Barack’s friendship bracelets. Sen. Amy Klobuchar’s (D-Minn.) campaign probably doesn’t regret tweeting that joke about Trump’s hair faring in a blizzard, now a prominent punchline in her campaign, but I sure as hell do.

Booker, God bless his weary soul, posted a video of himself reciting Christmas-themed dad jokes on Dec. 24. It received 13,000 likes. He dropped out three weeks later.

Why does Santa have three gardens?

Of course, cringe is in the eye of the beholder. To the “extremely online,” it feels embarrassing to witness, and maybe even evokes pity. But to people whose lives aren’t consumed by Twitter and Reddit, a candidate’s post featuring their dog or a meme of themselves isn’t thirsty, but may just be funny and relatable. And that’s what campaign strategists are betting on.

Kelly Ditmar, an assistant professor of political science at Rutgers University-Camden and a scholar with the university’s Center for American Women and Politics, told the Daily Dot that candidates likely have a digital strategy that involves posting potentially-cringey content. It’s partially an effort to garner earned media, gladly handed over by media platforms covering viral 2020 content, but also to target voters inspired, not repulsed, by, such content.

“Most presidential campaigns have a pretty robust digital team, and so very little that they do is without thought. Even if it backfires, at some point they thought that this would be beneficial to them in gaining attention [and] support,” Ditmar said.

Many candidates have their own go-to cringe posts.

Biden’s got his Trump videos set to ominous music. Mayor Pete Buttigieg’s short Instagram captions have the feigned depth of a film bro. Yang has that illustration of himself all over his Insta. Klobuchar has turned her daughter into a parody of Catherine from Veep. Sanders gets memed while playing sports to symbolize supporter donations. The most chaotic social plan comes from Mike Bloomberg, whose team thought turning him into a meatball and tweeting hollow, unfunny polls during January’s Democratic debate would pocket that earned social quite nicely (and thought right, nonetheless).

But there are wild cards—posts that don’t fit into the pre-existing gimmicky boxes these digital teams have carved out for their candidate—and they deliver the spiciest meatballs of all. Presented (mostly) without captions, for your own cringey pleasure:

From tanks to tees — #TeamJoe has got you covered for all things #Pride! Click the link in the bio to find everything you’ll need to show your pride this June.

Your opinion is important to us!
Which novelty veto stamp should Mike use as president? pic.twitter.com/uRjraM0FW9

God does not belong to a political party.

Lots of people "jumping" into the race so I decided to do a few sets of 10 box jumps on the 30 inch platform as a warmup to my workout! pic.twitter.com/u2SQwCp3ra

Poor Deval Patrick, whose campaign isn’t robust enough to even have a cringey gimmick, is trying here. And that’s enough to cringe at.

TeamTom is proud to announce the debut of Fan Art Friday. Scroll to see our very first submission by @justpeachyillustrations. Tag your submissions with #TeamTomCreates every Thursday by 12 noon PST for a chance to be featured here and to win a Tom 2020 sticker!

I can't really condone this but I feel like you have to see it.

So many people who believe they’re capable of leading the country, yet so much lifeless, grimace-inducing content. The crown for cringey candidate content, however, doesn’t go to Klobuchar, no matter how many quirky videos her daughter creates, nor Bloomberg, despite his campaign’s obvious, obvious thirst to be written about in the blogs.

Contrary to a popular tree-specific adage, if a candidate posts cringey content and few people are actually paying attention, such posts become the cringiest of all. This is the exact balance that Bennet has struck, being an unpopular (forgettable, really) candidate with an earnest but weak digital presence.

The lack of attention surrounding Bennet’s cringe-work almost makes me feel cruel listing the posts in which he’s proven himself the champion. But lest I forget, he’s an already-elected official running for the highest office in the country. Any such candidate deserves the utmost scrutiny, especially for his spoiled memes.

Andrew, how did you know I got a C in precalculus in high school — on the retake. https://t.co/3ZdlC0PnLx

There is no better last-minute debate prep while waiting backstage than your daughters texting encouraging memes before the curtain goes up. #DemDebate pic.twitter.com/bnD3lx0uEM

✅ Fried Fish (fried catfish will forever be my favorite food)

On the way to Gerri and Ron King’s house, we swung by the Concord Public Library. Too bad we couldn’t enjoy the flowers…

I’ve done a lot of things for a living. But I suspect I’ll never be a dancer. #LaborDay

I mean yes, let’s drain the swamp, but can we start with the swamp in my shoes after walking through a rainy orchard in New Hampshire?

A silver lining, if you can consider it such: Ditmar, the Rutgers assistant professor, said that this presidential campaign cycle is probably the first where white men have had to answer for their race and gender, and for the potential disadvantage their identities pose. And whereas female candidates may have once been deterred from posting cringey content in order to fit the prescribed mold and seem “qualified,” female candidates are pushing back against the outdated, antiquated norms that have traditionally made white men seem like shoo-ins for the job.

Sometimes the backstage briefing with @ewarren and the introducer gets a little wild. Today in Cincinnati: pic.twitter.com/aoCei2sCVw

By my own speculation, these changes may prime a future where all candidates can expose their innermost cringey selves, and be rightfully dragged online. Indeed, Ditmar said, greater equity in representation across candidates and campaigns can further this vision (and actual progress that matters, too).

“The real importance [is] having a team that brings diverse viewpoints to the table when talking about these issues. This cycle we have seen much greater diversity across different campaigns [than before], in terms of who’s in leadership [and] folks who likely are influencing messaging and social media,” Ditmar said. “The expectation…about having diverse perspectives at the table is that you avoid some of those particularly cringeworthy aspects in regard to race and gender.”