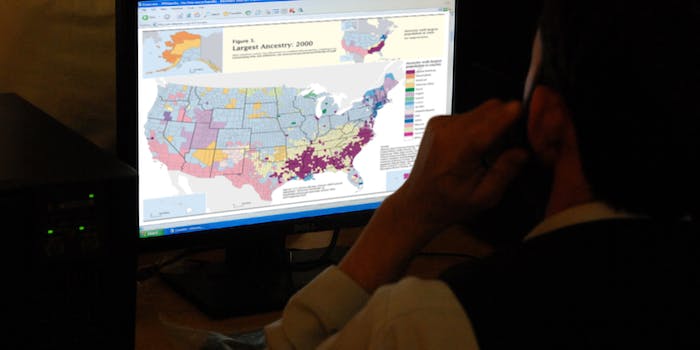 Will the 2020 Census be the next Healthcare.gov?

In capitalist America, you don't count on government, government counts you.

There was one major problem with the 2010 Census: It was the most expensive ever conducted.

In an era of shrinking government budgets, the constitutionally-mandated decennial survey of the American populace cost nearly $100 per household, more than double the price tag of what it cost in 1990. As a result, it’s no surprise that Census Bureau officials are turning to new technologies as a way to save money.

“Congress has instructed us to find a way to do things for no more money,” senior census official Jim Dinwiddie told the Washington Post last year. “So we’re looking at what things we might do that have a dramatic impact on costs.”

The Bureau plans to increase efficiency and reduce expenses through a set of new initiatives that may include having respondents fill out surveys over the Internet and letting census takers collect information on their personal mobile devices. According a recent report by the watchdog Government Accountability Office (GAO), however, the Bureau’s efforts are already running well behind schedule.

‟The Bureau is well aware that reforms are needed and plans to significantly change the methods and information technologies it uses to count the population,” the report reads. “However, the Bureau has not previously employed many of these methods at the scale being considered for 2020, which adds a degree of risk.”

Could these early issues signal a repeat performance of the federal government’s last attempt to roll out a massive, public-facing technology campaign—Healthcare.gov?

The 2010 Census cost $13 billion and its primary methodology—sending ballots to people in the mail and then doing in-person follow-ups with those who fail to respond—has been in place since 1970. The report notes that this method has become increasingly expensive as the U.S. population has grown in both size and diversity. As a result, Census forms and informational advertising campaigns have to be printed in a wider variety of languages, which further adds to the overall cost.

There’s also been a marked increase in the number of people who are reluctant to fill out the surveys or respond to in-person interviews—either because they viewed it as an intrusion into their personal privacy or due to concerted efforts at scaring people away from participating in the census by high-profile conservative politicians and political pundits.

The Bureau hopes that giving people the option of filling out the 2020 survey online will boost participation and lead to the need for fewer in-person visits. Considering that over 100 census workers were attacked or assaulted during a single month of interviews in 2010, pushing more people to fill out their surveys online has the potential to do more than just save money—it could also keep people safe.

Despite the clear benefits of technology-assisted census-taking, the advancements appear to be stuck in bureaucratic goop. Tasked with evaluating the Census Bureau’s progress in instituting these reforms, the GAO slammed the agency in its report, not only for consistently falling behind imposed deadlines but also lacking basic plans for how certain projects would be completed.

The Bureau has set a deadline of September of next year to finalize its plans for how the 2020 Census will be conducted. But the GAO found that only two of the six technology projects planned by the agency even have specified timelines for completion, and both of the ones that do are set to be finished well after that 2015 deadline.

Because the Bureau has either not developed or finalized most of its project schedules, the projects with defined schedules are not estimated to complete key activities in time to support the target design decision, and project plans to guide work and measure progress have not been completed for half of the projects, it is unlikely the remaining planned work will be completed in time to support the design decision in fiscal year 2015.

The U.S. Census Bureau’s American Community Survey, an online statistical temperature-taking that goes out to 250,000 households every month, already has over half of its responses come via the Web. The agency’s plan for the 2020 Census is to have at least 60 percent of responses be submitted electronically.

Even so, conducting a full census online leads to a whole host of new challenges. Agency officials need to ensure that all responses are kept securely confidential and that each person only fills out a single census form. They must also determine the best ways to advertise this new functionality through channels like online advertising and social media.

A portion of that advertising campaign will necessarily entail a push to convince people that sending their personal information to the government through online channels is safe. Granted, much of the demographic information given by census respondents is already contained in profiles maintained by Web advertising companies, but this sort of direct government interaction has a tendency to make many Americans suspicious.

The Census Bureau’s recent track record of smoothly deploying new technologies is far from spotless. In the run-up to the 2010 Census, the agency developed a system of specialized, handheld electronic devices to support mobile data collection by its workers in the field. While ultimately successful, that project suffered serious logistical trouble and ran more than $3 billion over budget.

As a result, one the Bureau’s efforts for 2020 is to develop a program through which census workers in the field ditch specialized devices and instead fill out interview details on their own personal smartphones or tablets. If done correctly, this program could be a huge cost-saver. But, once again, implementation could also prove tricky, especially when it comes to issues surrounding data privacy.

As the GAO report notes:

One of the objectives of the Commercial Mobile Device Project is to address legal and privacy issues related to enabling enumerators [census workers who collect information directly from interviewees] to use their personal mobile devices, but the Department of Commerce currently has a policy that states that personal devices should not be used to store or process sensitive department information. This policy also states that personal devices cannot be used in any official capacity other than to access business email without prior written approval.

The report’s authors recommend that Census officials take a long, hard look at precisely what they want to achieve, and to prioritize certain projects while relegating others to the back burner.

Despite clear challenges, experts believe there’s good reason to believe the 2020 Census will avoid a repeat of Healthcare.gov’s fumbled launch. In an interview with Government IT news site FCW, Scott Keeter, director of survey research at the Pew Research Center, explained that the technical challenges facing the 2020 Census aren’t as serious as the ones that caused Heathcare.gov to stumble so dramatically when it first stepped out of the gate:

It turned out that the capacity issue [of simply being able to handle a large amount of traffic, similar to what could go wrong with the census’ online efforts] was not fundamentally the major source of [HealthCare.gov’s] problems… It was a problem in the very beginning, but it had to do more with the integration of multiple datasets, the need to look up information from existing government databases and to integrate it in a way that really was beyond the scope of anything that I think any of the folks working on it had anticipated or experienced before. By contrast, the census task is much simpler. They’re essentially administering a survey, and the extent to which the need to have the survey itself connect to other databases is considerably smaller, if it’s necessary at all.

A Census Bureau spokesperson declined to comment on the report, noting that the agency was in the process of preparing an official response, which is slated for public release in about a month.