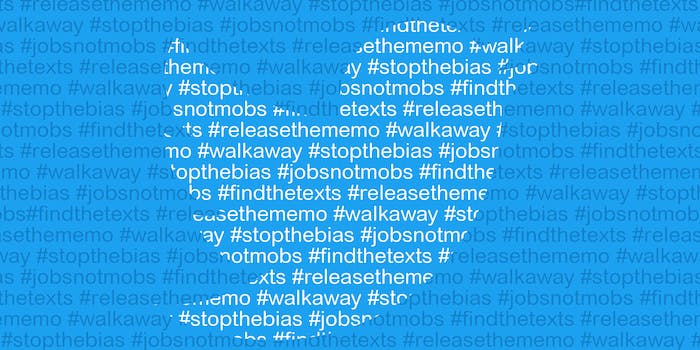 The worst conservative hashtags of 2018

Anger. Anger is what motivates so much of conservative punditry, thought, and online culture. One of the biggest challenges facing the conservative movement during the Trump administration has led to some of the silliest moments: How do you stay angry when you are in charge?

The right-wing internet, the internet of Alex Jones, Pizzagate, Benghazi, and birtherism, has put their guy in the White House. But, if there is nothing to be upset about, there are no memes, no raging @-replies, no content, and no clicks.

And so, conservatives make up things to be upset about. In 2018, this also meant making up ridiculous hashtags that dominated the discourse in 2018

#walkaway is only the beginning.
T-minus 7 weeks until we unveil the project that will put the evils of the Democratic Party to bed, once and for all. #NotYourVictim

#WalkAway is just the next iteration of an idea that has been seductive to Republicans for decades: Democrats, and particularly people of color, defecting from the party of liberalism en masse. For a moment there, it looked like #WalkAway was gaining traction: a video on the topic racked up a million views, and the hashtag was trending.

The only problem was that the hashtag was only getting attention from conservative websites and bots. While Sarah Palin and other right wing grifters pushed the hashtag, there is no evidence that it actually worked. Given the landslide victory by the Democrats in the midterm elections, there wasn’t a lot of walking away.

While the full reality of Trump’s relationship with Russia still needs to be untangled, there is no denying that something is rotten in D.C. and that special investigator Bob Mueller is onto something. Just ask Paul Manafort and George Papadopolous.

That hasn’t stopped the right from doing their best to cast doubt on the investigation. One of the dumbest attempts to do so actually kind of worked: #FindtheTexts.

The texts in question were between FBI employees Peter Strzok and Lisa Page. Strzok and Page worked on investigations of Trump’s relationship with Russia and of Hillary Clinton’s emails. The reason they have a long text history isn’t about their investigative work, however: They were conducting an extramarital affair.

In these text messages, the two didn’t just talk about their liaison. They also criticized Donald Trump. What was more two colleagues complaining about work than a massive conspiracy was seized on by conservative pundits, more grist for the right-wing conspiracy machine.

The right’s overreaction would be kind of funny if it didn’t have a human cost. Strzok was fired from the FBI in the midst of the #FindtheTexts saga.

The democrats are lucky Republicans are honorable people. If we played the game like they do the memo would be all over CNN and everywhere else by now. Maybe it’s time we stoop to their level? #releasethememo

It’s hard keeping track of all of the performative right-wing hashtags, but if you’ll recall, #ReleasetheMemo preceded #FindTheTexts and had a lot of the same aims behind it: discrediting the Mueller investigation.

House Intelligence Committee chair Rep. Devin Nunes (R-Calif.) prepared a memo that supposedly completely discredited the Foreign Intelligence Surveillance Act warrants that led to an investigation into Trump’s campaign. It was initially deemed classified, but the findings within it were (allegedly) earth-shattering. Then shortly thereafter, it was released.

The memo turned out not to be worth the social media storm swirling around it. Nothing terribly scandalous was in the memo, and what damning evidence Nunes had was largely exaggerated. Of course, that wasn’t necessary. The hashtag had whipped up conservative social media into such a frenzy that the actual memo was utterly irrelevant.

Whether you like it or not, President Trump still has a devoted fanbase that will parrot and amplify his talking points whether they make much sense or not.

After an October rally in Montana, Trump tweeted “#jobsnotmobs,” in an attempt to draw a comparison between Democrats, who he characterizes as being dominated by young antifa protestors, and Republicans are too busy to protest because they are doing and creating jobs.

The jobs versus mobs comparison became a favorite talking point of Trump in the weeks prior to the midterm election. #jobsnotmobs has slowed since the Republicans took a serious drubbing in the midterm races, but on any given day the hashtag continues to see plenty of activity.

It is hard to keep track of the various tech companies that the president has feuded with this year: This particular hashtag is about Trump’s beef with Google.

Specifically, #StoptheBias refers to Trump’s claim, backed up by a video he tweeted out, that Google promoted Obama’s State of the Union address, but not his. The allegation proved false, but was another blow in the battle between conservative voices and the tech companies they believe are censoring them.

Though the hashtag gained viral infamy after Trump’s tweet, #StoptheBias was actually first created as a rallying cry on behalf of Alex Jones after he was banned from numerous social media platforms.

The phrase continues to persist in fringe conservative circles as a handy way to conflate the violation of a website’s terms and conditions with censorship. When she handcuffed herself to door at Twitter HQ last week, right-wing figure Lara Loomer yelled, “Stop the bias of conservatives Jack Dorsey!”

If you thought that conservative conspiracies couldn’t get any weirder than Pizzagate, then you haven’t heard of Q.

Q is an Internet figure who fancies himself one-part Nostradamous and one-part James Bond, and just so happens to have a government security clearance. Q claims to have inside information on wide-ranging conspiracy theories involving criminal activity by America’s liberal elite.

Believers in QAnon, as the conspiracy theory is called, sift through scraps of information that Q provides hoping to get at the dark truth that American life is one vast conspiracy that can only be stopped by the heroic Donald Trump. While Democratic politicians are typically the villain of Q’s narrative, Hollywood, the Illuminati, the Rothschilds, and other right-wing conspiracy favorites frequently make an appearance. Attempts to elaborate on the demented conspiracy theories Q dishes out usually accompanied by #Q.

In a strange and troubling development, the culture of QAnon has left the deep recesses of the internet where it as formed, and you can now often see “Q” merchandise at Trump rallies.

How I've spent my day watching the meltdown over the reports of Kavanaugh having enough votes to be confirmed to the Supreme Court. Thankful for a #2A absolutist like Brett Kavanaugh! #ConfirmKavanaugh #RepealTheNFA #HimToo pic.twitter.com/MV3hLITiYt

Brett Kavanaugh’s confirmation hearings gave us some of the saddest and most ridiculous moments of the year. The tragi-comic tone of the proceedings yielded both the devastating testimony of Dr. Christine Balsey Ford and the absurd attempt by Brett Kavanaugh to handwave allegations against him with a decades-old calendar and references to weightlifting at his friend Tobin’s house.

The hearings also gave rise to the #HimToo hashtag, a clumsy attempt by misogynistic forces on the right to equate pain suffered by accusers and the accused. Though #HimToo has been widely derided online, it gives rise to a very dangerous sentiment: that the problem in America is not sexual assault, but false accusations of sexual assault.

Conservative pundits like Kaitlin Bennet and Candace Owens have championed the hashtag, and while it rightfully doesn’t receive much attention in the mainstream media, it remains a favorite of men’s rights activists, the alt-right, and the media ecosystem that caters to them.

Statistically speaking, #HimToo is incredibly off base, false accusations of sexual assault are incredibly rare. Of course, this hasn’t stopped the hashtag from continue to proliferate across social media.