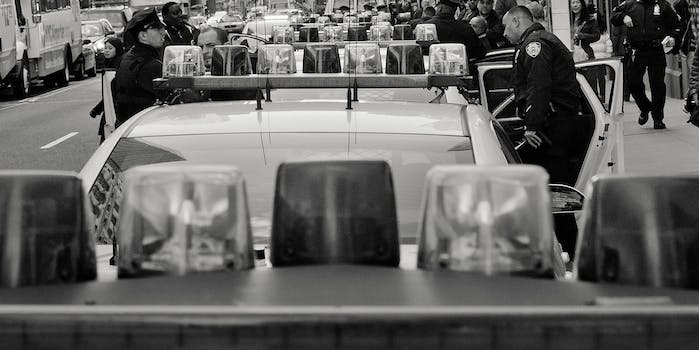 Watch a New York cop take a man’s money, then pepper-spray him in the face

The man wasn't arrested, but still didn't get his money back.

An unnamed New York Police Department officer is accused of stealing over $1,000 in cash from a man during a police stop, then pepper-spraying multiple people in the face when they demanded the money back.

The incident is under investigation by the Brooklyn district attorney’s office.

The video of the encounter, which took place just after midnight on Sept. 16, is brief. A police officer pushes Lamard Joye, a 35 year old Brooklyn man who was says he was celebrating his birthday with friends, against a chainlink fence.

The officer searches Joye and takes a wad of cash from his pockets.

Joye demands his money back and walks forward. The two exchange brief shoves and then the cop pepper sprays Joye in the face multiple times, sending the man reeling backwards as onlookers say, “He just stole his money. That’s robbery.”

As the officer leaves, he pepper sprays Joye’s sister when she steps in front of him and asks for his name.

“I’m not touching you,” she says as the spray hits.

Joye’s lawyer, Robert Marinelli, says he’s given Brooklyn cops pay stubs and bank records to prove that he earned the money working construction and had the more than $1,000 on hand to celebrate his birthday with his wife.

“I believe that this officer made an assumption that any money Mr. Joye possessed was obtained illegally and therefore he would not report the theft,” Marinelli told the New York Times. “This assumption was wrong. Mr. Joye is a hardworking taxpayer. An incident like this would never occur in a more affluent section of the city.”

The NYPD say the incident was caused when they received a call about a man with a gun.

“When officers arrived at the scene, they encountered numerous people at the location,” the department statement reads. “As a result of the allegations, the matter is under investigation by the Internal Affairs Bureau and CCRB.”

“A 35-second-long video does not provide enough information about a police encounter to come to any conclusion about what transpired,” Patrolmen’s Benevolent Association President Patrick J. Lynch said in response to the video. “The rush to judgment will leave this city with an impotent police department where police officers will be afraid to act and neighborhoods will be left to the mercy of the criminals. Resisting and interfering with an arrest is against the law. It is time to stop the amateur video activists who interfere with police operations from setting the agenda.”

Joye was never charged or arrested during the incident, but says he still hasn’t received his money back.

UPDATE: The NYPD now denies the allegations. In a statement, an NYPD spokesman said that “The crowd was ordered to disperse, but one of the males in the group attempted to prevent the officer from issuing [another] suspect two summonses, for disorderly conduct and unlawful possession of marijuana.” Police say just $62 was removed from Joye’s pocket and that it was vouchered properly, but Joye never claimed it.