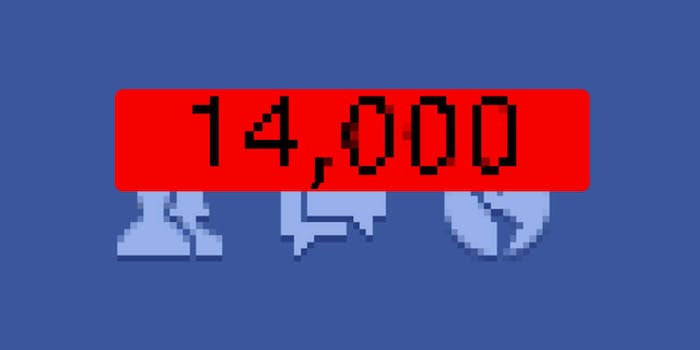 Typo causes woman to get 14,000 Facebook notifications—that aren’t hers

You may be just a few keystrokes away from becoming an entirely different person. That’s what Wake Forest grad student Kristal McKenzie, 33, learned after her email was recently inundated with Facebook messages and notifications intended for a teenage girl from Mexico.

It started last summer, according to Forbes, when McKenzie, who had quit Facebook several years ago before having a baby, received an email welcoming her back to the social network.

It was immediately clear the message wasn’t actually meant for McKenzie. For one thing, she hadn’t rejoined the site. Also, the email was written in Spanish and addressed to a girl named Katya. Clearly someone had used McKenzie’s email address by mistake while creating their own account.

At first the problem didn’t seem like that big a deal. McKenzie translated the message and clicked the option in the welcome email informing Facebook that there had been a mistake. McKenzie assumed her email would automatically be disassociated from Katya’s Facebook page.

But that’s not what happened. The 33-year-old mother from North Carolina continued to receive messages and notifications meant for Katya. It quickly became apparent that Katya was a teenager living in Mexico as McKenzie became privy to all her Facebook communications, everything from Farmville updates to personal messages. Over the course of nine months, McKenzie received more than 14,000 messages intended for Katya.

Throughout this period, McKenzie went to great lengths to try and correct the mistake. After her initial effort to disassociate her email, she tried making her own account with the same email address in hopes of displacing Katya’s. Instead, she began receiving emails from both Facebook accounts. McKenzie tried to log into Katya’s account to fix the problem herself, but found that even though she was still receiving emails, she was unable to use the address to reset the password and sign-in.

McKenzie later tried contacting Facebook abuse and PR teams directly to rectify the issue, but received no help. Her comments on a Facebook help forum were marked as “abusive.” She eventually went so far as to contact the Federal Communications Commission and Wired Safety, a kids online privacy organization. Still nothing.

Making the matter even harder to sort out was Katya’s apparent use of strict Facebook privacy safeguards that kept McKenzie from being able to contact her.

Since Forbes began investigating the matter, Facebook has apparently snapped to attention and resolved the problem. A Facebook spokesperson told Forbes that the mix-up was the result of a glitch and a rare set of circumstances:

When we looked at what happened, we found that in extremely rare circumstances, the link at the bottom of emails that people use to report messages that aren’t addressed to them wasn’t working correctly. This could have occurred only in the situation where someone registered their Facebook account with a mistyped email address, didn’t confirm it, and then successfully confirmed a contact phone number. We are fixing this to ensure it can’t happen again.

There is no response yet from Katya on this matter.

McKenzie isn’t the only one who’s gone through this frustrating experience. Many email users with common addresses report similar issues. Blogger Tom From HR detailed his own frustration at having his email address confused for several other men with the same or similar names. He was an early adopter of Gmail and got a coveted @gmail.com address. However, he put a period in between his first and last name, not realizing Gmail doesn’t recognize such distinctions. He cites this as the reason for some confusion about his email address.

“A few years ago I started getting some emails that were distinctly not mine,” he wrote. “Initially I thought these were spam but many of them seemed to actually be legitimate emails, including a tee time reservation for a ranch in Oregon. Eventually I started getting legitimate emails and personal correspondence for this person who seemed to share my name but who many people seemed to think had my email address and, obviously, did not.”