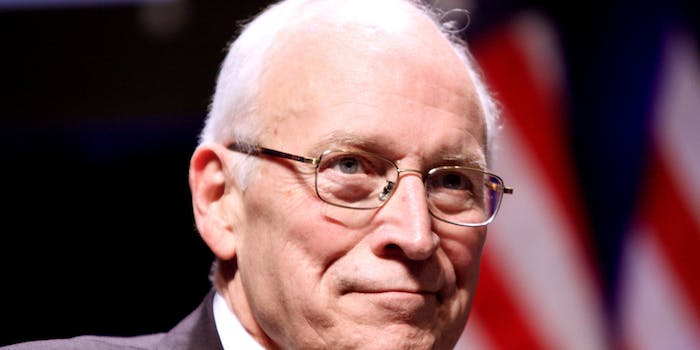 The blather of a man whom history has harshly judged.

If you can bear to do it, it’s worth watching Cheney’s entire encounter with a quietly incredulous Bret Baier. However, since Cheney mostly just prattles on about how bad 9/11 was, we went ahead and made you this list of his dumbest deflections and outright lies. Enjoy!

In a conversation about torture, this feels a little too on the nose.

2. “[Khalid Sheikh Mohammed] is in our possession, we know he’s the architect [of the 9/11 attacks], and what are we supposed to do? Kiss him on both cheeks and say, ‘Please, please tell us what you know’?”

Nobody—and we mean nobody—advocated for that. But thanks for the image, Dick.

3. “The report’s full of crap—excuse me, I said ‘hooey’ yesterday, and let me use the real word.”

Fitting that his lone apology is for a swear that wouldn’t faze a Mormon missionary.

4. “[Enhanced interrogation techniques] did in fact produce actionable intelligence that was vital in the success of keeping the country safe from attacks.”

5. “Torture was something we very carefully avoided.”

Through the manipulation of semantics, mostly!

6. “[Waterboarding] was not deemed torture by the lawyers.”

“Well, as long as it’s cool with the lawyers, sure,” said no one else ever.

7. “I have no sympathy for [terrorist detainees].”

Yeah, we sort of figured.

But he has read “parts” and “summaries”—like you, before you failed that English test on Macbeth.

The insinuation being that he helped to plan it? The truth is out there, Scully.

10. “The folks that went down to Guantánamo have been treated very well.”

11. “We did what we needed to do to keep this country safe and I think we did our job and the [CIA] deserves a lot of credit for it.”

Too bad there’s no awards show for the year’s best human rights violations—though that could easily change.