At the world’s hippest pizza joint, Snapchat is your job application

A marketing company is turning Snapchat into a jobs board in Austin, Texas.

Let’s say you’re opening a new pizza joint, and part of your artistic and culinary vision includes a staff curated from the coolest pool of applicants possible. How do you make sure you’re choosing from the crème de la millennial crème? First, do away with passé concepts like introductory handshakes and pen-and-paper applications. Next, turn to something like Snapchat—which is exactly what a pizza place coming to Austin has chosen to use as the first step in its hiring process.

Pizzabelli, which refers to itself as a “concept,” left its first little traces of existence on Craigslist with a help-wanted ad that directs potential employees to Snapchat to be considered for a host or bartending position. Applicants are encouraged to use the 10-second window to be creative and show a love for “pizza, Italy, food, whatever”—just have fun with it! 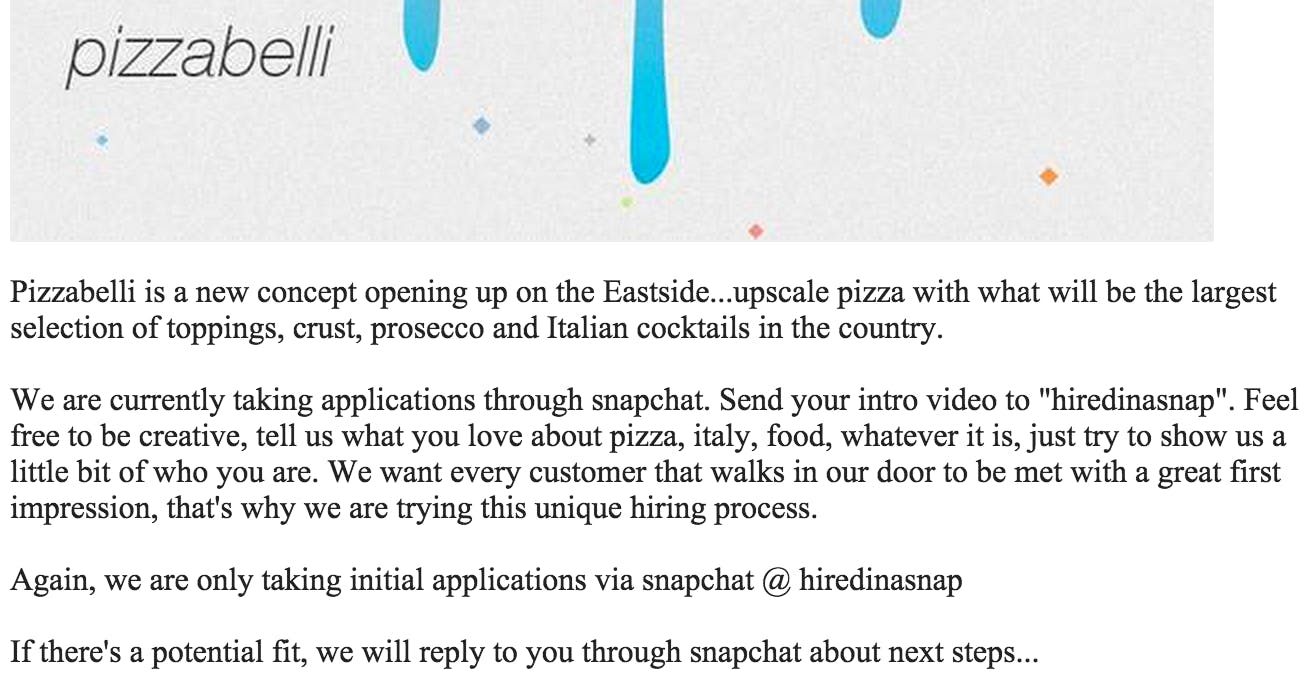 In the Craigslist post, Pizzabelli says it’s using Snapchat in the early application process because it wants every customer who walks in for a slice of “upscale pizza” to be met with a “great first impression.” So using a medium that allows brief, moving images that can only be viewed once is a great move, if first impressions (and weeding out weirdos) is what your business is focused on.

Who’s responsible for this Snapchat campaign? Pizzabelli has almost no Web presence, which seems unusual for a brand launching a Snapchat campaign. I reached out on Craigslist and got a response from a marketing company called Pique, which is “helping Pizzabelli launch their employee campaign.” Pique suggested its goal with this campaign is to turn Snapchat into a jobs board. “Right now we are posting a new employer each day, so follow us on Snapchat @ ‘hiredinasnap’ to get the latest job openings in Austin,” the Pique rep wrote.

Pizzabelli isn’t the first company or restaurant to turn use Snapchat to collect a batch of creative, potentially savvy applicants. In June 2014, a bar in Dublin used the app to accept bartending applications. A few months later, LMO Advertising in Washington, D.C., used Snapchat to hire an intern, which somehow makes a lot of sense.

Max Walker, the 22-year-old who was hired as the LMO “Snapchat intern,” told the Wall Street Journal the snap that landed him the job was a selfie with a lightbulb over his head. It’s unclear what kind of Snapchat says “I’d make an excellent hostess or bartender,” but surely Pizzabelli’s millennial applicants will think of something great.