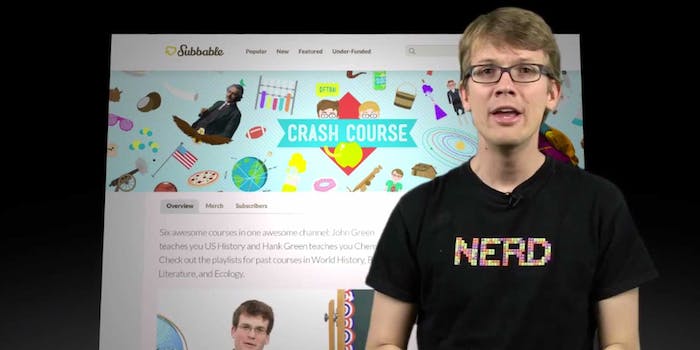 Subbable is a "pay what you want" platform allows content creators to focus more on their viewers than their number of views.

John and Hank Green have come up with an alternative to YouTube’s advertising-based revenue platform.

The Vlogbrothers, who are responsible for a number of successful YouTube channels and the annual Vidcon conference, launched Subbable earlier today.

Instead of relying purely on advertising revenue through services like AdSense, Subbable is a “pay what you want” video platform that plans to connect content creators to their communities and allow them to focus more on their viewers than the number of views.

To be clear, Subbable is not an alternative to YouTube itself. Rather, it’s a new way to support your favorite artists and webseries on video-sharing site.

The project had been in the works for months. Hank, who has long had a big influence in the YouTube community, filmed an open letter to YouTube that both praised the site for the opportunities it’s given him over the years and criticized its constant changes.

“An advertising-driven Internet can only ever care about how many people see something, not about how much those people care about it or how much they benefit from it,” Hank said in the Subbable introduction video, “and that’s why my brother and I created Subbable: a voluntary subscription platform that allows audiences to directly support the projects they love in an ongoing way.”

The platform is a mix of crowdfundraising sites like Kickstarter or Indiegogo and pay-what-you-want models. You choose how much you want to subscribe per month, and while you can subscribe for free, there are benefits to supporting content creators with paid subscriptions.

“Most importantly, you’re making the content you love possible, and making it free to people who can’t afford to see it,” John wrote in the FAQ, noting that the average person pays about $5 a month for a subscription.

Like Kickstarter, each channel determines a set of perks, and when you’ve subscribed long enough, you can redeem perks for free. For example, if you subscribe at $10 a month for five months, you can then redeem a $50 perk.

About 10 percent of the money raised will go towards Amazon and running the site’s servers, but content creators receive the rest of the funds raised.

Crash Course, an educational channel that was part of the YouTube Original Channel Initiative, is the only channel currently on Subbable. John and Hank have used it to ensure the site works. Other content creators are able to apply online.

For some, it was a no-brainer that John and Hank would create an alternative revenue service as initial reports of YouTube’s initial paid subscription launch isn’t doing as well as the site hoped.

@hankgreen @realjohngreen You guys would be the ones to create a beautiful and smart off youtube subscription service. lol