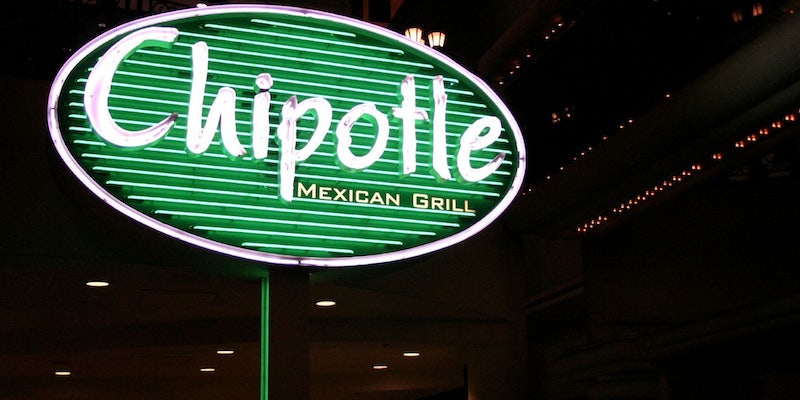 Chipotle, home of dangerously-loaded burritos, is asking customers to refrain from bringing guns—loaded or otherwise—into its stores.

Chipotle, in a statement sent to several media outlets on Monday, said:

Recently, participants from an ‘open carry’ demonstration in Texas brought guns (including military-style assault rifles) into one of our restaurants, causing many of our customers anxiety and discomfort.  Because of this, we are respectfully asking that customers not bring guns into our restaurants, unless they are authorized law enforcement personnel.

Moms Demand Action, which is backed by former New York Mayor Mike Bloomberg who co-founded the group Mayors Against Illegal Guns, said it collected more than 10,000 signatures on an online petition in “just a few hours” as part of the campaign.

Shannon Watts, who founded of Moms Demand Action in the wake of the Sandy Hook Elementary School shooting, called Chipotle’s announcement “bold and meaningful,” in a statement released by the group on Monday. She added that “it shows that you can support the Second Amendment while also taking reasonable measures to ensure that Americans are safe and secure in the places we take our children.”

And Moms Demand Action took to Twitter to gloat:

Thank you @ChipotleTweets for standing up for the safety of your customers! pic.twitter.com/kMpExQQiGD via @Everytown and @MomsDemand

Chipotle is hardly the first battle ground for gun control and open carry activists. Last year, Starbucks asked customers to keep their guns out of its stores even in states where open carry is permitted. The coffee chain made its decision several weeks after a Facebook group called Gun Owners organized a Bring Your Gun to Starbucks Day.