The newest trend in 3-D printing is huge, literally

More companies are experimenting with impressive ways to scale designs for 3-D printing. 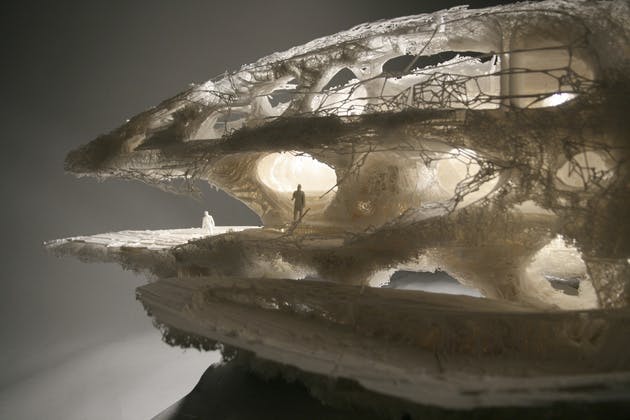 If you’ve been following the recent explosion of interest in 3-D printing, you’ve probably seen pretty much anything made with those amazing pieces of equipment. Guns, clothes, skulls, bikes, shoes, cars, exoskeletons, sex toys—the list goes on. And as President Obama very famously declared in this year’s State of the Union address, 3-D printing technology “has the potential to revolutionize the way we make almost everything.” It’s going to save America!

Slow your roll there, Barry. Will 3-D printing really change the we make everything? Sex toys are one thing, but what about buildings? Buildings are really big, and 3-D printers are, well, not so big. At least, not until recently.

The latest hot trend in the hot trend of 3-D printing is experimenting with methods to make colossal objects. This takes a big of ingenuity, a lot of money and a ton of money, but it is possible. The primary challenge to overcome, as I suggested a second ago, involves the physical constraints of most 3-D printers on the market. If a printer is the size of a standard office-issue copy machine, it’s typically not going to be able to 3-D print an object bigger than that. It could print a number of parts that could be assembled into larger object, which is more or less how some folks have produced a partialy 3-D-printed car.

However, a new wave of innovations around the 3-D printing hardware itself is happening right now and it’s kind of awesome. Unsurprisingly, a bunch of too-smart kids from MIT are leading the charge. The university’s so-called Media Matter group is experimenting with a number of different devices that are capable of printing outside the box, literally.

The new construction methods will make all kinds of crazy designs possible.

One approach borrows some techniques from the robotic arms used in the more modern factories around the world. Instead of installing screws or welding together piece of metal, though, it deposits polymers in a highly orchestrated and increasingly precise way. Imagine it’s a one of those shovel-shaped things on the back of a concrete truck arm pouring the grey mud into a mold. Same idea except much more futuristic.

Another method is closely related, but instead of a robotic arm doing the work, it’s a little robotic truck. The so-called Mobile Printing Test Platform basically bumbles around the perimeter of the structure being build, pouring on whatever material will make up the walls and consequently leaving  a new layer of the structure in its wake. The MIT team envisions contractors of the future dispatching “swarms” of these cute little things working together like a construction crew that never needs a break.

Imagine a hunded of these zipping around a construction site.