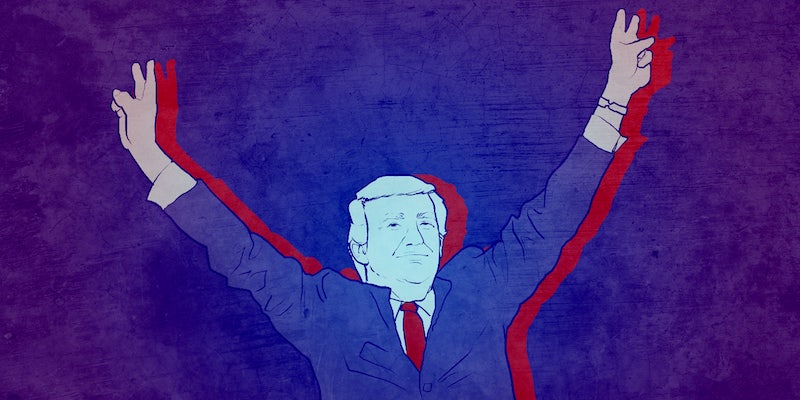 We've been through this before.

Donald Trump says he has a secret plan to defeat to ISIS. He doesn’t.

What Trump does have is a half-baked version of Richard Nixon’s supposed suggestion during the 1968 presidential campaign that he had a secret plan to end the Vietnam War, along with an amateurish but very dangerous view that presidents of the United States should conduct wars in secret, without democratic consent.

We know that Trump lacks a secret plan to beat ISIS because he has at various times made his plans public.

They laughed at me when I said to bomb the ISIS controlled oil fields. Now they are not laughing and doing what I said. #Trump2016

“I’ve been saying this for a long time,” Trump said on “Morning Joe” in November. “Attack the oil, because that’s their primary source of wealth.”

Trump would have us believe that beyond these suggestions, he has a coherent proposed course of action he is holding back to avoid tipping his hand. “I won’t tell them where and I won’t tell them how,” he said in teleprompter-supported foreign policy speech last month. “But they’re going to be gone. And soon.”

Just announced that as many as 5000 ISIS fighters have infiltrated Europe. Also, many in U.S. I TOLD YOU SO! I alone can fix this problem!

ISIS is making big threats today – no respect for U.S.A. or our "leader" – If I win it will be a very different story,with very fast results

Trump is probably lying. Here’s why: We know he lacks, and certainly lacked when he began talking about his secret plan, either the personal knowledge about the groups fighting ISIS or the experienced advisers to devise a serious plan. He has confused the Quds force, an Iranian military group, with the Kurds, the Middle Eastern ethnic group whose Peshmerga fight ISIS. He has said the difference between Hezbollah (which also fights ISIS) and Hamas (which does not) does not matter.

We know that Trump fibs frequently. On Friday he denied that he used an alias and pretended to be his own spokesman in a 1991 phone call, despite audio in which the spokesman sounds just like Trump, as well as Trump’s prior admission, under oath, that he used an alias to act as his own fake spokesman. Trump has made 26 statements during his campaign that Washington Post fact checkers have deemed false. He continues to say many of them.

We’ve been through this before.

Americans should also doubt Trump’s secret plan because we’ve been through this before. Nixon in fact never said he had a secret plan to end Vietnam. But in a stump speech on the campaign trail in 1968, he said he would “end the war and win the peace” in Vietnam, and declined to elaborate.  A wire story said Nixon seemed to want to keep his plan secret, and his primary opponent, Michigan Gov. George Romney, Mitt’s father, took to asking where Nixon’s “secret plan” was. The term stuck.

Regardless of his campaign rhetoric, Nixon acted secretly, in Vietnam and elsewhere. During the 1968 campaign, Nixon moved in secret, not to end, but to prolong, the Vietnam War. Using a backchannel, he encouraged South Vietnamese leaders to reject a peace agreement that President Lyndon Johnson’s administration was negotiating in Paris. Nixon secretly told the South Vietnamese he would get them a better deal. Nixon sabotaged negotiations because he feared announcement of a peace deal would help Democratic nominee Hubert Humphrey win the election.

Once elected, Nixon did not end the Vietnam War. He escalated it. He began reducing the number of Americans troops in Vietnam. But in secret, without congressional approval, he ordered the bombing of North Vietnamese supply routes in Cambodia and sent Marines into Laos. The effort extended American involvement in the war and continued the killing of U.S. troops, until a 1973 peace deal.

Nixon’s actions were part of a so-called “madman strategy.” He wanted communist leaders in the Soviet Union and China to think “we might be ‘crazy’ and might really go much further,” in Vietnam, in the hopes those countries would push the North Vietnamese to sue for peace, then-National Security Adviser Henry Kissinger said in a memo revealed last year.

Trump, deliberately or not, apes Nixon’s bid to leverage inconsistency.  “We must as, a nation, be more unpredictable,” Trump said in his foreign policy speech last month.

Expounding on this concept earlier this month, Trump said presidents should not publicize the deployment of troops overseas. “If you want to send them, send them,” Trump said at a recent rally in Spokane, Washington. “But keep your mouth shut.”

Trump’s argument is a junior varsity version of Nixon’s approach.

Trump’s argument is a junior varsity version of Nixon’s approach, and reflects the thinking of many get-tough types who consider congressional oversight and transparency foolish hindrances on effective war-making.

They are hindrances. But they exist because most Americans, living and dead, from the framers of the Constitution to people voting now, consider benefits of such requirements greater than their costs.

Presidents announce where and when they are sending troops not because it helps win wars, but to maintain our system of government. Congress, at least according to the Constitution, has to declare war for the U.S. to wage war. Presidents tell the public where and when they’re sending troops, because voters ultimately have to agree to the decision.

American exceptionalism, if it exists, derives not from assertions of greatness but from that predictability and transparency in foreign policy and from the fact that presidential powers are checked.

Nixon’s Vietnam strategy, like Nixon, failed in part because his reliance on secret maneuvers violated that requirement and left voters furious over the secret expansion of a war they voted to end.  Trump’s glib revival of Nixonian rhetoric is less a problem than his proposed resumption of Nixon’s practices.

Trump has no secret plan to beat ISIS. That he claims otherwise is bad. But Trump wants to have a secret plan. That’s worse.