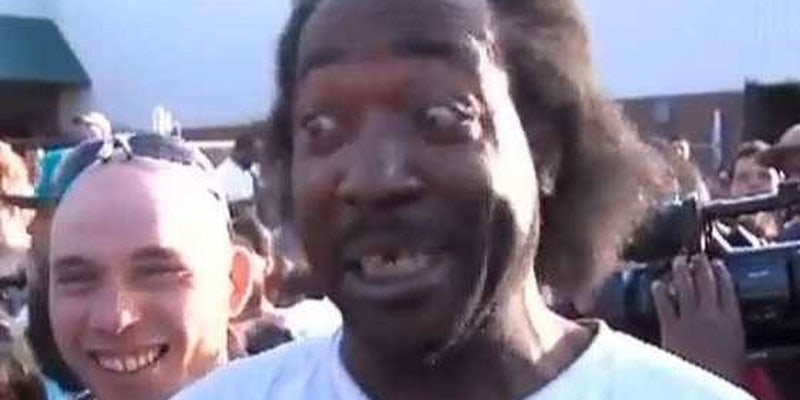 There's a dark side to this humor, and it's about race and class.

When footage of Charles Ramsey—the Cleveland man who rescued three women enslaved for more than a decade—hit the Internet, he became an instant celebrity. Unfortunately, his sudden fame didn’t stem from his heroics, but rather because of how he spoke.

Ramsey joins Antoine Dodson, Sweet Brown, and Michelle Clarke as yet another poor black person who has entertained the online masses because of his or her colorful on-camera interview. These individuals became famous because of the way they talked, because of their catchphrases. Dodson had “Hide yo kids! Hide yo wife!” and “they rapin’ errrbody.” For Brown, it was “ain’t nobody got time for that.” Ramsey, the newest member to this unfortunate canon, earns his spot with “I’m eating my McDonald’s” and “We eat ribs and whatnot.”

These sound bites were cherry-picked by the Internet users for their own amusement. What’s disconcerting is that the Internet zeroes in on phrases that employ elements of African American Vernacular English (Dodson’s pronunciation of the word “everybody”) or hint at a low levels of education (Brown’s usage of a double negative) to serve as the punchline. These are the jokes the Internet has decided we need to be laughing at—and they’re all about being black, poor and living in the ghetto.

There’s something off here, not just about how these taglines are said, but what they’re actually saying. The catch phrases are humorous, for sure—but they also shine a light on the harsh realities that Ramsey and his like face on a regular basis. Take, for example, Dodson’s proclamation that the bed intruder is “climbin’ in your windows” and “snatchin’ your people up.” That some Internet commenter would find this image comical only further trivializes the fact that Dodson lived in a crime-ridden area (he has since moved his family into a safer neighborhood thanks to the money he made for being a viral sensation).

Then there’s Sweet Brown, proclaiming that she’s got bronchitis and that “ain’t nobody got time for that.” Her phrasing is hilarious, because, yes, of course no one wants to deal with the respiratory ailment. But whereas for most, dealing with bronchitis is an inconvenience, for someone like Sweet Brown it can very well mean lost time from work, medical expenses, and a real financial burden that can’t be afforded. Sweet Brown probably literally does not have time for that.

Finding humor in the turn of phrase of a lower class black population is, of course, hardly a recent phenomenon. Amos ‘n’ Andy, a radio and television sitcom where white actors portrayed stereotypical black characters, was very popular from the 1920s to the 1950s. In this day and age, we like to think that we’re no longer like that, that we’ve moved on as a society to shun this type of entertainment.

The fact is, these online videos are essentially a modern day minstrel show. The comparison is made even more glaring by the auto-tune renditions, which turn the likes of Dodson and Ramsey into “musical negroes.”

… any different from this?

One could even say that since Ramsey, Dodson, and Sweet Brown are not characters like Amos and Andy, but real people, the parody is that much more insidious.

There’s also something quietly unsettling about the fact that online audiences have tended to latch onto, and focus on, these catch phrases instead of the horrific events that lead to the interviews in the first place. Dodson got on camera after thwarting an attempted rape. For Brown, it was a fire at her apartment complex she was lucky to escape. And, as we all now know, Ramsey liberated three women who had been held captive for over a decade.

Am I taking this too seriously? Are we just seeing the light-heartedness of a bad, bad situation? One could argue so by looking at Kai, the white homeless hitchhiker in West Fresno, Calif., who became an Internet sensation after rescuing two innocent bystanders with a hatchet.

But there is a stark difference between the hatchet-wielding hitchhiker and the others. Yes, Kai got the Gregory Brothers treatment, but  his video only managed to amass 2.6 million views since Feb. 7, 2013. By contrast, “Dead Give Away>,” the group’s auto-tunification of Ramsey’s interview, has already collected more than 1.68 million in a little bit more than a day. On a similar note, Kai’s phrases have simply not entered the Internet vernacular like Dodson’s, Brown’s, and Ramsey’s.

In all cases, though, rather than deal with the scary realities these and countless other marginalized citizens face, we choose to celebrate the words they use: words that make us laugh. Yes, we sometimes applaud them for their bravery, but actually we’d prefer to quote them on memes and cross-stiches. And this is all the more concerning when its focus is black, inner city residents, where we are essentially making light of the difficult socio-economic conditions they inhabit.

What right do we really have to co-opt their way of speaking to pepper into our own speech for the amusement of ourselves and friends?

How does this differ from putting on blackface for entertainment?