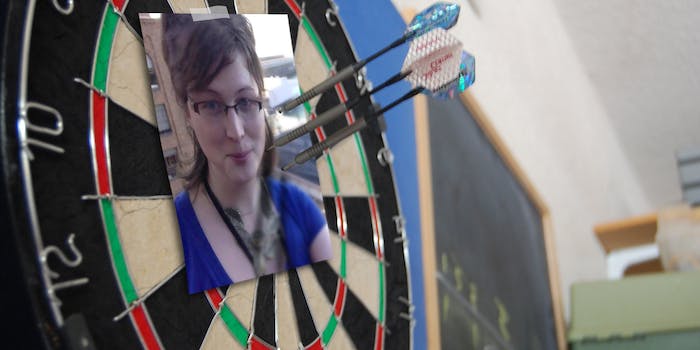 Inside Google’s complicated relationship with a pro-slavery troll

Will the real Justine Tunney please stand up?

“Hopefully, I’ll live to see a day when all the muckraking progressive reporters/bloggers are sent to prisons.”

Who is Justine Tunney? It depends on where you look—and who you ask. She’s a software engineer at Google’s New York office, according to her LinkedIn profile, which reveals that her highest degree was an AA in business administration and that she started working for Google in 2012. A profile at Valleywag explores her roots in Occupy Wall Street and what appears to be an abrupt turnaround to the opposite end of the political spectrum, with tweets promoting slavery and classism and comments like “poor people breed like rabbits.”

She might be a brilliant troll. She might be experiencing a genuine radical shift in her personal politics. She might be an exhausted activist: “I curse the day I decided to get involved in activism,” she said recently on her Twitter account. She’s been the subject of more than one piece exploring who, exactly, she is, but she remains an enigma.

What fascinates me about Tunney is not what she says on the Internet but how her Internet personae reflect the highly malleable world we live in, where we can use technology to construct a huge variety of digital selves to suit different settings and occasions. It’s impossible to know who anyone is in the landscape—and not in the sense of sockpuppets and pseudonyms, anonymity and invisibility. Even those of us who look directly at each other and are quite open about our identities are still curating our appearances.

Tunney appears to be going for shock value, as she openly admits on ask.fm. “Allow me to explain why I’m able to make progressives lose their minds,” she says.  Dismissing those involved in social justice movements online, she adds: “People need to lay off the smack that is liberal belief politics, and go do something productive, like get a job, rather than hang out on Twitter all day.”

This is a curious statement for a woman who spends a great deal of time on Twitter, and, indeed, on the Internet at large. On her blog, The Good News (where she insists on using the obnoxiously pretentious long s), she subjects readers to rambling and sometimes incomprehensible posts about liberalism and society. Her Twitter is filled with a bizarre and eclectic assortment of tweets that veer wildly between subjects, but she wants to remind readers that: “When you read my tweets, please remember that I once organized a far-left international grassroots social movement called @OccupyWallSt.”

Her decision to enter the fray over Occupy Wall Street may be rooted in her long history with the organization, including her early action to register domain names and Twitter accounts associated with it, but many of the movement’s participants clearly resent the idea that someone “organized” them. If this is a presentation of her liberal credentials, it falls short—and it makes her all the more inscrutable. Is she a liberal engaged in performance art, making commentaries about society through her outrageous public persona? Is she a liberal who genuinely believes that the system is broken, and is trying to spur people into action?

Has she experienced a radical political change of heart that’s leading her to conservatism? She compares herself to Stalin at one moment, a dalit at the next. She rails against the progressive movement while promoting a technocracy, arguing that the tech movement is best suited to take over governance and retweeting accounts like “Tech Hate Crimes” that document anti-gentrification and anti-tech graffiti. She admits that the world is broken and tells people to take to the streets but mocks the very movements doing just that.

“If you want to know what I’m really like, you’d have to meet me in person. I’m an entirely different person offline,” she says.  It’s a slap in the face to the notion that online presentations have to be correct and truthful depictions of who people are, and it’s also a telling comment on the assumption that you can come to know someone through that person’s online persona.

This is what gets to the core of what is most interesting about Tunney. Not her abrasive, peculiar, winding personality, which has already been the subject of numerous explorations (pieces that, I note, she resents bitterly). But the fact that she touches upon a very real subject, and one that unsettles the Internet: On the Internet, nobody knows you’re a dog.

Every public missive is carefully crafted and thought out, fitted into the larger puzzle of a persona, groomed, massaged, and well thought-out. Who is anyone, really, in a world where you don’t see people at their most authentic and spontaneous and are merely presented with what they choose to show you? Even those who are highly active on social media, sharing “every” aspect of their lives—what aren’t they choosing to show you, and how does it bear on their larger personality?

In this climate, who Tunney is may be, perhaps, less interesting than who she wants people to think she is, and how she wants people to conceptualize her. She’s cast herself as both an iconoclast and a martyr, and she advances this narrative of herself fervently. Her very public shift (some term it a meltdown) was a revelatory moment, and so, too, is the reaction to that shift.

Google is experiencing pressure as her employer to take some sort of action against her, whether it be censure, firing, or a warning about how she uses social media. Valleywag has attempted to shame Google, asking why the company keeps a pro-slavery advocate on payroll, and the company has yet to respond to requests for comment. Is the company going to bow to pressure, putting Tunney out to pasture or at least forcing her to choose between social media and employment? Or will it turn the other cheek, even in a landscape where the tech industry is being closely scrutinized over diversity issues, gentrification, and more?

Perhaps Google knows something we don’t: The “real” Justine Tunney and what she’s actually like in the workplace.

Image note: Justine Tunney told the Internet to use the above photograph for their personal dartboards. We complied with her request.