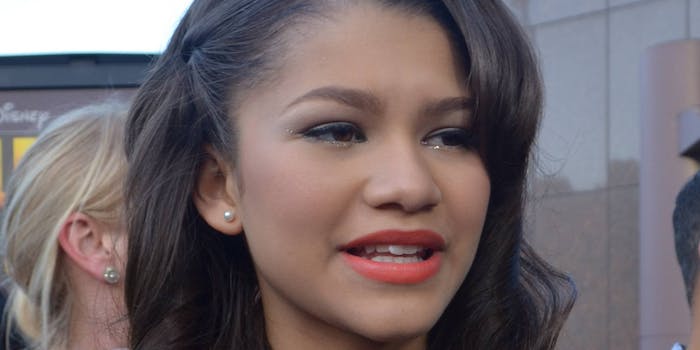 This 'Fashion Police' joke hit way below the belt.

E!’s Fashion Police have built an entire programing empire around lampooning the sartorial choices of anyone brave enough to step onto the red carpet, but on Monday night, things went too far.

A photo of singer Zendaya Coleman prompted an unbelievably offensive comment from E! host Giuliana Rancic. When an image of the 18-year-old pop artist sporting her hair in dreadlocks appeared on screen, the Fashion Police co-host made a joke that was insensitive to say the least.

Instead of discussing her Oscar fashion choices, the E! personality remarked that she felt like Coleman smelled like “patchouli oil or maybe weed.”

Fans were instantly outraged by Rancic’s words and began taking the E! personality to task on Twitter.

When Kylie wore Locs you went crazy but when it's Zendaya wearing it gorgeously you dare to say her hair smell like weed? @GiulianaRancic

Thankfully, the singer conducted herself with poise and grace, taking to social media after the Fashion Police Oscar special aired to post a note in defense of her hair style.

After listing numerous esteemed individuals who have chosen to wear their hair in dreadlocks, Zendaya discussed her feelings about the hair style.

“To me, locs are a symbol of strength and beauty, almost like a lion’s mane,” the singer wrote. “I suggest some people should listen to India Arie’s ‘I Am Not My Hair’ and contemplate a little before opening your mouth so quickly to judge.”

Shortly after Zendaya’ posted note, Giuliana tweeted the singer to apologize for her remarks.

Dear @Zendaya, I'm sorry I offended you and others. I was referring to a bohemian chic look. Had NOTHING to do with race and NEVER would!!!

Regardless of whether the Fashion Police co-host was referring to her “bohemian chic look,” we hope that Rancic heeds Zendaya’s words. At the very least she should get a refresher course in sensitivity by watching “Shit White Girls Say…to Black Girls.”