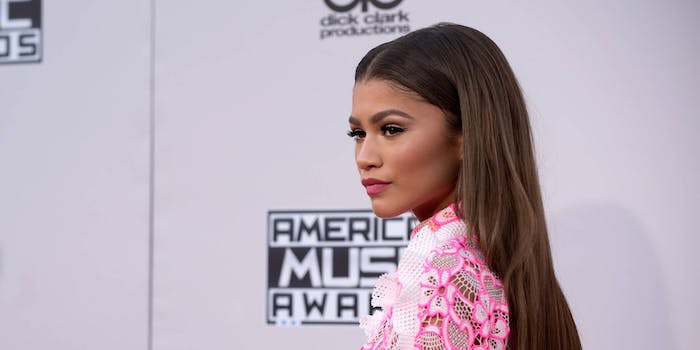 Zendaya alleged via Snapchat Tuesday that a grocery store employee refused her service after she attempted to buy a bunch of gift cards due to the color of her skin.

The incident occurred at Vons, a grocery store chain located in southern California and southern Nevada, when Zendaya and a friend attempted to buy $400 in gift cards. She knows that some places have a limit on how many gift cards you can purchase, so if that was the case an employee would usually say that or have them put some of them back so that they’re within the limit. But the woman who was at the cash register didn’t do that, according to Zendaya.

“The lady that was helping us, I don’t think she was a huge fan of our skin tone,” Zendaya said as her friend, sitting in the driver’s seat, added that the woman was rude. “In fact, I recall her not trying to help us at all, saying that we couldn’t buy the gift cards, and then throwing my wallet.”

While the 10-second clips were posted to Snapchat, some of Zendaya’s followers stitched them together into one video.

“She was like, ‘you can’t afford this’ is how she looked at me,” Zendaya said.

Zendaya has used her platform to speak out against racism and sexism in the past, and it’s something she and her friend have experienced before. But her story has a happier ending: A Vons manager eventually helped Zendaya purchase the gift cards.