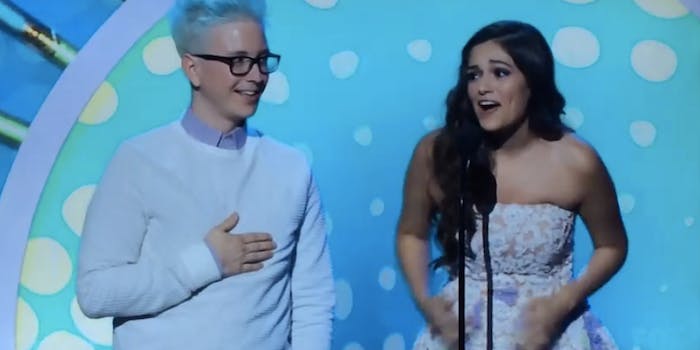 Viners, YouTubers, and the stars of the Web make a big impression.

Some YouTube stars will be able to add a surfboard to their trophy collection this August when the Teen Choice Awards celebrate the best of the Web’s creators.

Nominations for the Web categories for the 2015 Teen Choice Awards were announced Thursday, with high-level stars like Tyler Oakley, Michelle Phan, and Lele Pons picking up multiple nominations. Bethany Mota leads the pack with three across various categories this year; she’s also a returning winner from 2014.

Web is its own diverse category at Teen Choice Awards for 2015, with a variety of stars earning nods in categories like Choice Web Star: Male or Choice Web Star: Comedy. In fact, the event had to break out creative new categories to still honor traditional celebrities’ use of the digital space, like the Social Media King and Queen categories, which are full of mainstream celebs like Justin Bieber and Katy Perry.

In the platform-specific categories, YouTube and Vine stars are nominated in their respective spaces, but for Instagram and Twitter, the field is full of traditional celebs, not any homegrown stars. Instagram, at the very least, has its own celebrities who might deserve some TCA shine, but the show’s nominations speak to exactly how much more mainstream some platforms are seen compared to others.

A full list of YouTube and Web nominees are below, and fans can vote online through Aug. 16 at 6pm PT. The Teen Choice Awards air Aug. 16 on Fox.