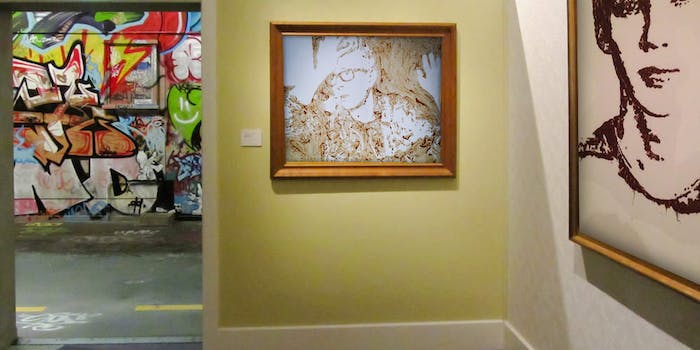 “I would love to say I had a deep meaningful sociopolitical reason for painting people in Nutella or Taco Bell hot sauce, but the main reason is it was cheaper."

A Nutella Troye Sivan staring back at you from a white canvas.

MirandaSings’ iconic red lipstick takes center stage as it composes the entirety of her face.

This all describes the art of YouTuber and artist Conor Collins, a 25-year-old in Manchester, England, who’s taken a very nontraditional approach to capturing the stars of YouTube, inspired by the nature of their newfound celebrity.

“The people … are quickly becoming famous for just being them,” he explained to the Daily Dot. “Not being footballers or musicians or politicians, but just being them and saying what they thought. As an artist who paints people, this new group of influential people on the Internet tickles my creativity. So it just made sense that if I were to begin to make these portraits anyway, might as well do it in the way which best reflects them—on YouTube!”

While Collins’ nontraditional choice of paint seems to evoke a social commentary on the particular stars, he claims it simply boils down to cost.

“I would love to say I had a deep meaningful sociopolitical reason for painting people in Nutella or Taco Bell hot sauce, but the main reason is it was cheaper,” he explained. “So much cheaper. If I had painted Tyler Oakley in oil paint, those might have cost me around £50. The sauce was free with a meal.”

Of course, Taco Bell hot sauce is an apt choice for Oakley, who works with the fast-food chain on various brand deals. Sivan is obsessed with Nutella, and MirandaSings’ red lipstick is her trademark, making the medium of Collins’ expression seem effortless. So far he’s tackled seven different YouTubers in his art, following a host of other pop culture icons like a portrait of Olympic diver Tom Daley composed of homophobic tweets he received after coming out, and Jack Nicholson made completely out of coffee beans. Collins says he can’t pinpoint the inspiration for who he chooses to immortalize in his art.

“I am a very restless and spontaneous person,” he said. “So when I want to paint someone, I just grab a canvas and get going ASAP. I am sure a psychologist would be able to find the real answer. Perhaps aspirations of grandeur, perhaps a fascination of Idols due to my Catholic upbringing now turned atheist, or perhaps on some level I am still looking for love through my art. But in truth, I haven’t the faintest idea!”

The one downside of food-based YouTuber art is it doesn’t have a very long shelf life. Collins says that even if fans were interested in owning his art, by the time it reached them, it might be covered in mold. He has gained some attention from the subjects of his art, including Taco Bell’s social media presence and Sivan, and while Collins thinks it would be grand to send the portrait his way, “god knows how you get something like that over to Australia!” He’d love to get the portraits into the hands of his subjects, especially the ones of which he’s a personal fan.

“I recently painted Hannah Hart, big fan of her,” he said. “She is very sincere on camera and often that can be lost, especially when you start becoming bigger and a ‘character’ appears. Tyler Oakley interests me a lot; he is in some ways the archetype of YouTuberness. So I might do another one of him but with more of a twist. Letting ideas spin around for now.”

Collins’ painting has always come from an emotional place, as his first forays into the artform came because he wanted to be closer to a crush.

“I started painting about four years ago,” he explained. “Originally I just did it because I really liked this guy, and he painted, and [I] just wanted to be able to do something to be near him! Then when that didn’t work out, and I mean really didn’t work out, I found the painting didn’t stop even though I wasn’t around him anymore. In fact it increased, the style changed and started being much better. Since then I haven’t been able to stop painting. Sometimes my friends tell me off for staying up so late working on a piece, but they now understand. I have to paint. If I don’t do something creative at least once a month, I get very fidgety.”

For now you can continue to appreciate Collins’ unique creations on his YouTube channel, as well as on Twitter, where he shares his bigger-budget creations of the non-YouTuber variety. As for the attention he’s gotten, Collins says it’s flattering but also weird.

“The strangest thing is when celebrities start reaching out to me,” he explained. “I have emails now from Golden Globe winners, musicians, Olympic medalists, and billion-dollar companies. Its all very overwhelming.”