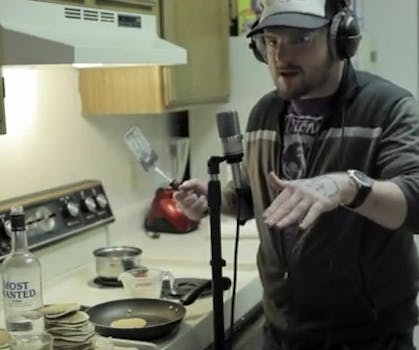 Here's why a "Look at Me Now" parody hits a million views in 24 hours.

Kansas City rapper Mac Lethal, at the request of his fans, raps to the beat of Chris Brown’s “Look at Me Now” while making pancakes.

Twenty-four hours later, more than a million people have seen his video.

Mac Lethal’s “Cook with Me Now” parody, titled “Nerdy white kid KILLS ‘Look at Me Now,’” has two things that might explain its near-lethal infectiousness. (A million views in 24 hours fits any definition of a viral video.) First, the lyrics to Mac Lethal’s song are incredibly witty. Second, the magnetism he exudes while making his pancakes is undeniable.

The video has already been picked up by countless blogs and media, including the Huffington Post, HyperVocal, Gawker, and the front page of the social news site Reddit.

“The best part is you’re using real words and they’re understandable, rather than making up some random sound﻿ and calling it ‘slang’ like 99% of rappers” writes shamz0rz in a top comment on YouTube.

Mac Lethal namedrops everyone from pop star Rihanna to fellow YouTube phenom Chuck Testa, swears profanely and then rhymes “economy” with “dichotomy.” He flips from high to low culture as deftly as he turns over his pancakes.

Speaking of which, we’re hungry.