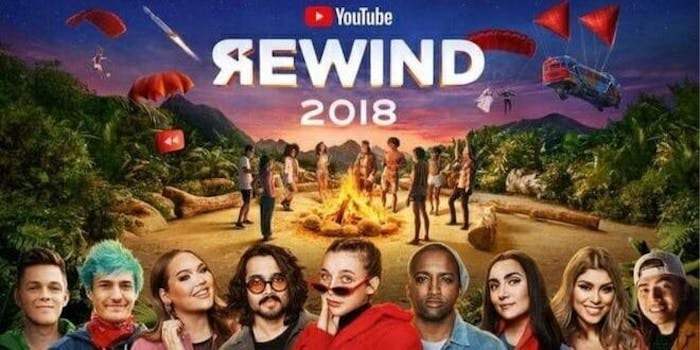 Update 8:56am CT, Dec. 13: Only one week after the 2018 version of YouTube Rewind was released, it’s become the most disliked video on all of YouTube.

As of the morning of Dec. 13, YouTube Rewind 2018 had crossed the barrier of 10 million dislikes (against only 2.1 million likes as of this writing). The previously most disliked video, Justin Bieber’s “Baby” music video, has 9.8 million thumbs down. But that video was released in 2010, so it’s taken eight years to accumulate that many dislikes. YouTube Rewind accomplished more than that in seven days.

In a statement released to the Verge, YouTube said, “Honest feedback can suck, but we are listening and we appreciate how much people care. Trying to capture the magic of YouTube in one single video is like trying to capture lightning in a bottle. We also learned that creating content can be really hard and this underscores our respect and admiration for YouTube creators doing it every day. Keep the feedback coming and maybe we’ll release a top 10 list of ‘Rewind dislike’ reaction videos.”

How much do people despise the 2018 YouTube Rewind video? Enough so that it’s one of the most disliked products in the platform’s history.

As YouTube does every year, it released a video last week that reminisced about the past year, reveled in what the platform and its creators did well, and showcased the successful trends the streaming service might want to continue.

But wow, people really seem to hate it, as it’s received more than 7.1 million thumbs-down (or dislikes) compared to more than 2 million likes. It was only released four days ago, so that’s an impressive amount of hatred toward one video. As the BBC points out, it’s already the second-most disliked video on the entire site.

The most disliked video? That’s Justin Bieber’s “Baby” music video. Considering that Bieber’s video was released in 2010—and considering that video also has 10 million likes—it’s safe to say that there’s never been this level of ratioed vitriol at just one piece of YouTube content.

The video has been criticized for showing off too many celebrities—the video opens with Will Smith while John Oliver and Trevor Noah are also featured. While well-known YouTube stars like Casey Neistat, Liza Koshy, Markiplier, How Ridiculous, and the Dolan Twins make appearances, there was plenty of discussion of who was not seen or mentioned on the video.

PewDiePie, who is still holding off T-Series to reign supreme as the most popular YouTube channel in the world, wasn’t shown. Neither were Jake Paul, Logan Paul, or KSI—whose boxing matches were the biggest live events on the channel this year. And neither was Shane Dawson, who earned tens of millions of views with controversial documentary series on Jake Paul and Jeffree Star.

As PewDiePie said in a recent video, “I remember Rewind [used to be] something that seemed like an homage to the creators that year. It was something cool to be a part of. Now it’s like I’m almost glad I’m not in it, because it’s such a cringey video at this point. It’s so disconnected with the community and its creators.”

The Verge wrote about how YouTube didn’t include the most controversial of its creators because the platform wants to show advertisers that those who were asked to participate in Rewind are those “people you want to invest time to watch and whose videos you should run ads on.”

In that way, the video managed to win some praise by including footage of drag queens Trixie Mattel and Katya Zamolodchikova, for pointing out the increasing diversification on the platform, and for celebrating the continued empowerment of women.

But overall, the vast majority of viewers thought the video was a flop.

As one commenter wrote, “If YT was really like this I would never visit this site.”