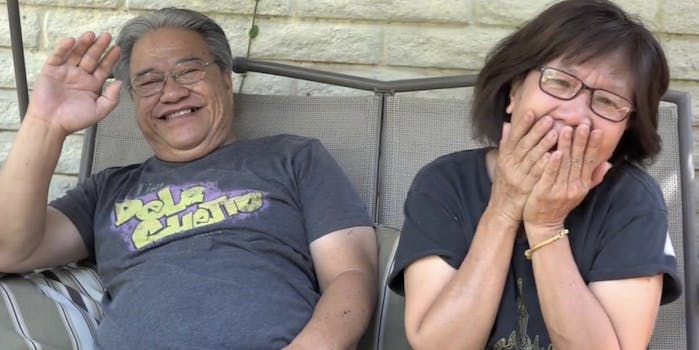 YouTube star stuns his parents by paying off their mortgage

It was worth it just for the look on their faces.

YouTuber Timothy DeLaGhetto realized a childhood goal by paying off his parents’ mortgage with earnings he’s made in the last eight years on the platform.

“When I started doing YouTube I was doing it for free, just to get exposure,” DeLaGhetto told The Daily Dot. “The fact that I was able to  take something that I was having fun doing and turn it into something I can live off of is kind of crazy to me.”

DeLaGhetto creates skits, vlogs and music on his YouTube, earning himself over 2 million subscribers and 700 million views across his channels. As a child, he promised himself he would give back to his parents by succeeding at his dream of being an entertainer. DeLaGhetto’s association with and stock in Maker Studios, which sold to Disney for $500 million earlier this year, is part of what he credits with being able to push him over the edge financially and make that promise a reality. In true YouTuber fashion, he turned the moment into a tear-jerking video where he surprises his parents with a check for their mortgage on the porch.

Of course, DeLaGhetto’s father’s first response after he smiles over the check is the same as every parent everywhere, regardless if your son is a YouTube star or not: “And what about grandchildren?”

“I kind of felt like as soon as I said surprise, that’s what they thought I was going to say,” DeLaGhetto laughed. “That’ll be the next video.”

Now that he’s paid his parents’ mortgage off, DeLaGhetto has many other milestones left on his bucket list. Chief among them, to star in a movie with Will Smith. A lofty goal, but definitely not impossible since he’s already made inroads to mainstream media a part of Nick Cannon’s Wild ‘N Out on MTV2.

DeLaGhetto’s parents are both very supportive of his work and watch everything he posts. “My dad watches [my vlog channel] religiously because he’s in them, and reads all the comments about himself. They’re big supporters, especially since they’ve seen what it’s turned into. They’re proud.”

His parents own a Thai restaurant, and DeLaGhetto thinks they will actually take it easy like he intended when gifting them the money, although they won’t give it up completely.

“They were telling me they might even close the restaurant for an additional day to just chill,” he said.