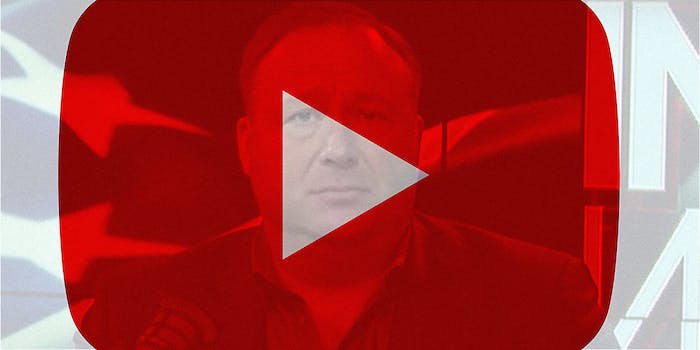 After the mass shooting at Marjory Stoneman Douglas High School on Feb. 14, YouTube scrambled, once again, to remove dangerous conspiracy theory videos about the shooting and its survivors. But it’s already facing some human error.

YouTube stated last year that it was beefing up its human moderation squad in an effort to find and remove offensive or extremist videos that have plagued the site. The company took a step in the right direction last week by issuing a strike to Alex Jones’ Infowars channel for posting a video claiming shooting survivor David Hogg was an actor. However, some right-wing accounts were allegedly banned in this sweep.

The Outline detailed a handful of accounts that had reportedly been issued a total or partial ban. Infowars’ Jerome Corsi claimed his livestream was disabled for 90 days.

However, a YouTube spokesperson told Bloomberg that some of these bans might have been in error: “As we work to hire rapidly and ramp up our policy enforcement teams throughout 2018, newer members may misapply some of our policies resulting in mistaken removals. We’re continuing to enforce our existing policies regarding harmful and dangerous content, they have not changed. We’ll reinstate any videos that were removed in error.”

YouTube still has a long road ahead. Over the weekend, journalist and professor Jonathan Albright wrote about the thriving conspiracy and “crisis actor” video phenomenon: “Every time there’s a mass shooting or terror event, due to the subsequent backlash, this YouTube conspiracy genre grows in size and economic value. The search and recommendation algorithms will naturally ensure these videos are connected and thus have more reach.”