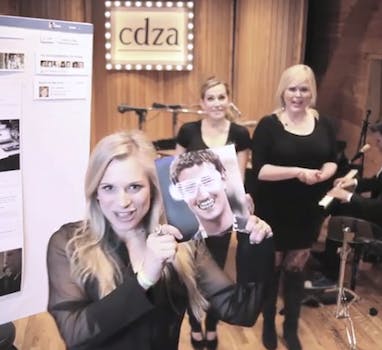 Facebook founder Mark Zuckerberg’s 28th birthday is having the best week ever. He turned 28 on Monday, and his company goes public on Friday.

The timing couldn’t be better for him to be immortalized in song.

CDZA, a comedy troupe that performs “musical video experiments,” launched a musical Tuesday to chronologically document the history of Zuckerberg and his social network.

In 12 parts and just under four minutes, three bubbly blonde singers and a pianist vocalize the founder’s past eight years, from Harvard to the launch of the Facebook IPO. The musical variety spans the gamut of showtunes, from the melodies of West Side Story to Annie Get Your Gun.

Founded seven months ago, CDZA promises a new experimental musical every Tuesday. (Something to keep us entertained between Scumbag Thursdays, perhaps?)

The troupe’s previous two videos, “History of Lyrics That Aren’t Lyrics” and “History of Whistling,” suggest the group with continue with their efforts to document the past through song.