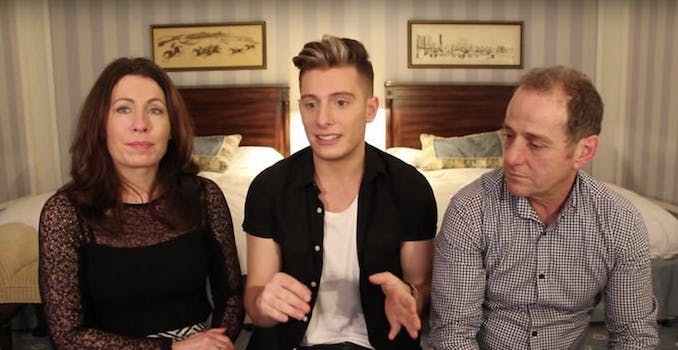 YouTuber discusses coming out with his parents, and his father reveals something heartbreaking

Khalaf's father went through more than his son initially realized.

Emotional coming-out videos regularly go viral on YouTube, but 25-year-old YouTuber Riyadh Khalaf’s video struck an additional nerve because of what his father confessed as they looked back on the moment.

Videos that feature parents often garner massive eyeballs, like the viral video of the Rhodes twins calling their father. Khalaf’s video is not a traditional one; he’s already out to his parents. But he invited them on his show to discuss his past disclosure and how they both came around to supporting him.

Khalaf has appeared with his parents in more lighthearted fare before, but this video reveals his different experiences with his Irish-Catholic mother and his Iraqi father. Lorraine, his mother, found out inadvertently, and Khalaf told his father later. His first recounting was emotional but supportive, but then Sam, his father, revealed that he had had a darker reaction at the time.

“We all went to sleep,” he says, “but at about three or four in the morning I got up and went to sit on the deck, and I was looking for [pills] for suicide.”

Sam then breaks down in tears after his confession, and the rest of his family reacts in shock. But his father then adds that his initial reaction seems “so stupid” now and reiterates that he supports his son.

“I hope this video gives you some belief that things can work out in the end even when the situation looks completely hopeless,” Khalaf wrote on YouTube. “If we can come out the other side I think most of us can.”