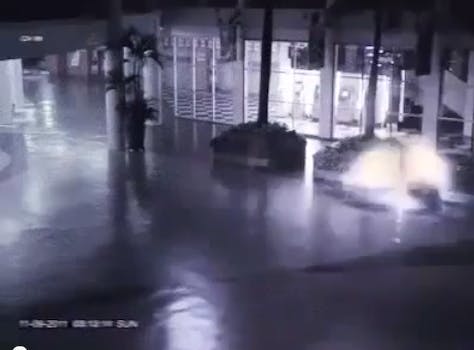 Many are watching it, but few are buying in.

Many believe in—or at least admit the possibility of—the existence of angels or aliens. Still, an eight-month-old viral video claiming to show an angel or UFO in an Indonesian shopping mall may have collected a lot of traffic, but it didn’t get too many believers.

Still, the video enjoyed a big burst of online popularity last week. By May 13, even old and august wire-services, such as United Press International, couldn’t ignore it.

The video claims to be security camera footage shot on Sept. 11, 2011. It shows a grainy image of an empty floor near the head of an escalator. Then, a bright light in the rough shape of a winged object appears on the top right of the image and descends briefly to the floor before rising up out of sight. The light is only visible for a couple of seconds.

The video remained obscure until last week, when the right-wing website WND.com (also known as World Net Daily) wrote about it in an article titled, “Mystery: ‘Pulsating winged being’ on camera,” and asked, “Is it an angel, demon, hoax or something else?”

On May 14, headlines in the “Faith” section of WND’s front page included “Demonic oppression is real: here’s how to beat it” (the article offers no specific suggestions, only the chance to buy a book on the subject), and “Sequel to ‘Islamic Antichrist’ released” (another book-buying opportunity).

The bulk of the online attention lavished on the video before the mainstream media picked up the story seemed to stem from the WND story in forums dedicated to the occult.

Members of the Rapture Flight to Heaven forum were divided on whether the video showed something real or a hoax. “Heidi” was prone to believe it, and even found significance in the length of the film snippet: “Have you noticed the length of this video? It was 5:55 (if I saw the number clearly) that number is “redemption for the bride of Christ”.”

But the next commenter, “Valerie,” suspected a fraud: “[E]verything in this video is dark and obscure, and then a sudden light on the right hand side, looks like a flash from a camera bouncing down then up…someone is playing a trick on people.”

Commenters at the Wiccan forum Everything Under The Moon were even more skeptical. “Greek Male Witch” pointed out: ““[W]hy an angel would jump in front of the security camera? to showoff? or by a mistake? I don’t think so, mistakes are a human right, angels won’t make mistakes, plus the light that radiates reminds me of “Adobe Elements” thing! but who knows?”

In almost every religious tradition, myth system, and folklore in the world there are many stories about God (or Jesus, Krishna, Buddha, Zeus, or other deities) coming to Earth at a time when there are so many frauds, charlatans, and hoaxes already that no one recognizes the real thing. If angels or aliens ever do visit us, they’ll probably have the same problem.