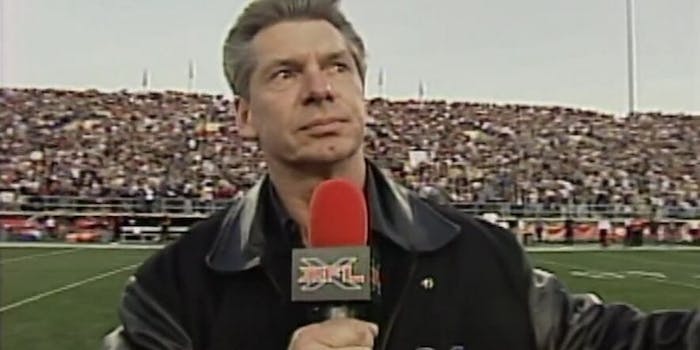 Some of these don't age so well.

Seventeen years after his football startup was given the 1-2-3 count and defeated after just one season, WWE owner Vince McMahon said Thursday he would resurrect the XFL.

McMahon said the football league would reboot in 2020 and that unlike the NFL, which has been tagged into the political world thanks in large part to President Donald Trump, the XFL will not harbor social or political issues.

Will it be entertaining? Obviously, that’s unknown at this point. But the first version of the XFL was filled with the kind of hoopla and entertainment the conservative NFL was not about to attempt. For now, as we wait for McMahon to sort out what this new league will entail, let’s take a YouTube trip down memory lane to remember what the first incarnation of the XFL was all about—and perhaps why it failed.

Games didn’t begin with a coin toss to determine which team received the football first. Games began with a mad dash between two players to see who could grab the ball the fastest. Considering the first injury ever suffered by an XFL player came during the opening scramble, though not the one featured in the video below, this was not a good idea.

The league did not treat its cheerleaders very well. Exploitative is a word that comes to mind, especially when the XFL teased a live shot of the cheerleaders’ dressing room during halftime. The video below does not age particularly well.

This should also be noted: In the new XFL, there will be no cheerleaders.

The Rock did all he could to help. And look at the former wrestling superstar. He’s got all kinds of hair on his head.

If you remember one player from the league, it’s probably Rod Smart. And you probably remember Rod Smart for the nickname that was emblazoned across the back of his jersey: He Hate Me.

In the old XFL, football was most certainly played. Whether it was quality football was in the eye of the beholder.

On Thursday, McMahon made it sound like the XFL 2.0 will be a more buttoned-up than the first version of the league. But if you want to remember the times when a sleazy video of a cheerleader’s dressing room was part of the presentation, YouTube will likely hold that time capsule forever.