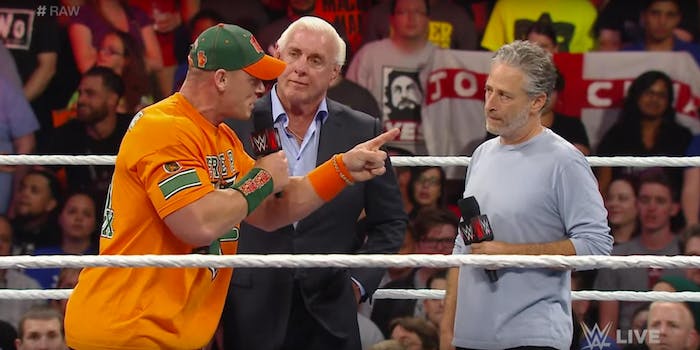 Get ready to rumble.

Get ready to rumble.

The WWE announced today that it’s partnered with Samsung to release two virtual-reality experiences filmed during the 2015 SummerSlam at Barclays Center in New York.

This news comes hot off the tail of the NBA airing its season-opening game on Samsung headsets, and artists like Rihanna and the Weeknd experimenting with VR music videos in the past month.

The clips were filmed in August and, according to the press release, will feature:

360-degree highlights from SummerSlam weekend, including the showdown between John Cena and Seth Rollins and the surprise appearance of Jon Stewart as host. The other video recaps the match between Finn Bálor and Kevin Owens at NXT TakeOver, a WWE Network special that took place the night before SummerSlam.

And if you tuned into the original airing of the show, you don’t need to worry. All of the footage will be brand new.

According to WWE Chief Revenue and Marketing Officer Michelle Wilson, “We were able to put [the virtual-reality camera operators] in positions where they were a fly on the wall.”

The clips are available for the Samsung Gear VR Innovator Edition as well as the forthcoming $99 Gear VR headset, which will be released Nov. 27.