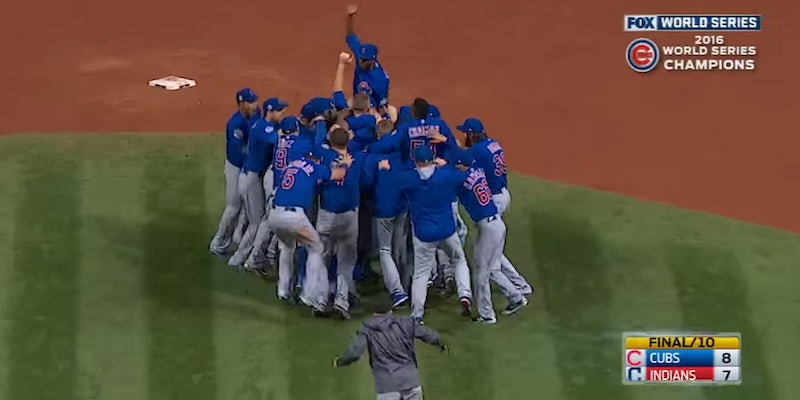 This tweet predicted the World Series perfectly—2 years ago

So, this guy's basically a wizard, right?

After 108 years of hardships, some close calls, many more bad seasons, and an old-fashioned curse, the Chicago Cubs finally won the World Series in a wild and tension-filled Game 7 against the Cleveland Indians.

Baseball fans of all types were on the edge of their seat from the start, and the game remained tied after the ninth inning, forcing extra innings.

Cleveland and Chicago. Going into extra innings on Game 7 of the 2016 World Series. Who the hell could have predicted that?

At first, it seemed like it could’ve been a prank made to fool baseball fans glued to their computers and phones. But then you look at the date: Nov. 4, 2014. Remember: Twitter has yet to allow users to edit their own tweets, so this one is legit.

According to @RaysFanGio, a Cleveland and Florida sports fan, he tweeted out that prediction the day that the Cubs hired its current manager, Joe Maddon. A news article from MLB’s website announcing the Cubs’ hire of Maddon is dated Nov. 3, 2014 (while the Chicago Tribune had it on Oct. 31), so in that case, close enough?

He also appeared to have predicted that the Cubs and Indians would face off in the World Series earlier this month, although he was off on the victor and how long it would take.

So, he’s basically a wizard, right?

One part of his prediction has yet to play out. We’re not in the middle of an apocalypse because Game 7 between the Cubs and Indians went into extra innings.

I don't get why people are so impressed by this prediction. The world isn't even going to end for another week! https://t.co/m2UIYtxrjE